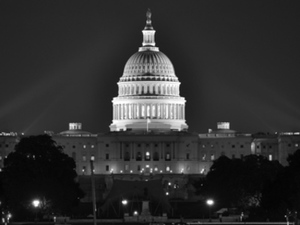 Working in Washington D.C. is not like eating Thanksgiving dinner with the relatives; you can't get out of a heated political debate by excusing yourself to find another piece of pumpkin pie.

When I decided to spend a semester "abroad" in D.C., I was nervous that my political savvy would not be up to par.  This fear was warranted.

In D.C., politics are a constant topic of conversation. The biggest party I went to this semester was a Republican debate watch. (Hey people at Oktoberfest, eat your heart out.)

But luckily, these constant political conversations aren’t the terrifying, heated type you have with your uncle at Thanksgiving dinner. Here, discussions are less passionate and more personal.

My friends and I have discussed this phenomenon a lot; we think it's due to proximity. When three people in the room are working for Senators, two for federal agencies and five more for think tanks, we tend to have pragmatic views of various legislation. The closer we get to the actual personnel doing the lawmaking, the further we get from partisan hatred and zeal.

When John Boehner resigned, he became a meme on national social media; a geo-filter on Snapchat.  However in D.C., it was more of a collective "he's adorable when he cries" type of response.

Up close, politics are less absolute.  Behind closed doors, it seems that Democrats and

Republicans agree a lot more than they disagree. Republicans aren't all frat boys and Democrats don’t all practice yoga and drink green tea.

Now, if only we can convince our aunts and uncles to step back and take the long view.  Politics is give-and-take. And the system works, if only we all sit down to the holiday table and respect each other's views.  Pass the gravy.