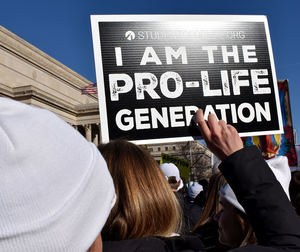 The legal, political and ethical ramifications of abortion have divided both a nation and the Notre Dame student body, for decades. Many students, citing the right to bodily autonomy, argue in favor of the pro-choice position; still others support pro-life policies. This year, as in many years past, a sizable portion of the latter party had the opportunity to voice their opinion at the Jan. 19 March for Life in Washington, D.C.

This year, over 1,000 students from Notre Dame, Holy Cross and St. Mary’s marched in opposition to abortion in a trip organized by Right to Life ND. In a large logistical undertaking, students traveled to D.C. in a convoy of 19 chartered buses and slept wherever Right to Life could acquire free space — everywhere from gym floors to church basements.

After a Jan. 19 Mass presided over by Rev. John Jenkins, C.S.C., the enormous group of students made their way to the National Mall to listen to pre-March speeches by Speaker of the House Paul Ryan, Vice President Mike Pence and President Donald Trump. The March itself lasted for several hours, concluding in front of the Supreme Court. After the March, many students stayed an extra day in D.C., exploring museums and monuments before boarding the buses to return home.

Many of this year’s marchers, in addition to advocating for fetal rights, promoted women’s rights as well. “Empowering women does not have to include abortion,” sophomore Jane Yeom, who attended the March, said. “Empowering women means supporting women who are dealing with the hardships of an unexpected pregnancy.”

There was a vast and diverse crowd. Protest signs, carried by people of all races and ages, proffered both religious and secular arguments against abortion. “This was my first year attending the March for Life,” Yeom continued. “I had always thought of upholding the sanctity of life as a Catholic issue. However, I came to the realization that it is so much more than upholding God’s teaching. Being at the March made me realize that preserving the importance of life is a given right to all, including the unborn.”