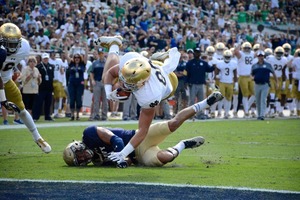 After a thrilling finish at home against Miami, Notre Dame hit the road to take on perennial rival Navy at EverBank Field in Jacksonville, Florida on Saturday Nov. 8. The Irish looked to continue their five-game win streak against the Midshipmen and get their season back on track after a shaky start.

Things kicked off well, with junior quarterback DeShone Kizer hitting senior receiver Torii Hunter Jr. with a 23 yard 4th down completion followed by a 26-yard touchdown pass to open the scoring. Navy would respond in kind, relying on the strength of their classic triple option to take them down the field and score.

Notre Dame would go ahead on a 39-yard field goal by sophomore kicker Justin Yoon before forcing the Midshipmen to turn the ball over on downs, giving the Irish the chance to extend the lead. However, the Navy defense stood tall, forcing the Irish into the only punt of the game.

Both teams would add a touchdown before halftime, making the score 17-14 in favor of the Irish. With only eight total possessions in the first half, it was clear that every drive was crucial.

The Midshipmen came out strong after the break, putting another touchdown on the board and forcing Notre Dame to respond. The Irish answered as sophomore receiver Equanimeous St. Brown flipped into the end zone on a 13-yard pass play.

Navy would eventually regain the lead, taking an astounding nine minutes off the clock as they drove down the field to score. With the Midshipmen up 28-24, the Irish needed a big drive. They made it all the way to the red zone, but settled for a field goal on fourth down, bringing the score to 28-27 with 7:28 left in the game. The Irish would not get the ball back.

The remainder of the game was agonizing for Notre Dame, with Navy’s run game pounding the Irish and burning through the clock. The Midshipmen converted two crucial fourth-downs to retain possession, and ultimately took a knee to end the game without ever returning the ball to the Irish.

“We’re disappointed,” Kizer said. “Obviously we’ve been in six games where it goes down to the last drive. In this situation, we trusted our defense to go out and make a play and Navy made a couple of more plays than we did.”

Ultimately, it was the inability to stop the run, and the clock, in a fivepossession second half that sank the Irish. “I think that was the rub,” Kelly said. “If we get the ball back with 1:14, I’m feeling pretty confident we’re gonna find a way to score. They made a couple of the big plays they needed to hold onto the football late and that was really the difference.”