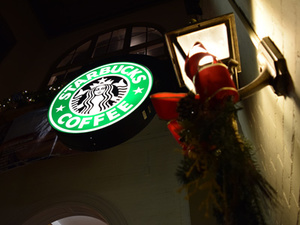 THE SCROOGE OF CHRISTMAS Starbucks has been condemned for its business practices.

Church officials have announced that due to the uncovering of the Starbuck’s anti-Christian bias via CupGate, the use of Blessed Salted Caramel Latte in place of Holy Water will be halted in parishes across the U.S.

“Well this is just awkward,” one local priest said. “All this time we’d been endorsing Starbs during Mass, and we had no idea that they were a heathen corporation.”

During CupGate, the Seattle-based coffee company, considered a beacon of corporate ethics until now for its fair-trade policies, was uncovered to be an anti-Christian corporation.

“I mean, it might as well be written on the wall,” Ellen O’Hare, 43, said from her place in line at a Starbucks in Indianapolis, “Red cups? That’s the most un-Christmas-like thing I’ve ever seen. They may as well have put a pentagram on it."

“I think we can all agree this is a Venti-sized disaster with an extra shot of secularization,” O’Hare, a grown adult with a job and a frightening number of different outlets through which to express her opinions, said out loud in real life.

The thrice-divorced frequent gambler cut the interview short when the name “Alien” was called at the counter.

Officials also noted that Pope Francis has rescinded his 2016 contract to appear as a spokesperson for the Cool Lime Refreshers, although the Pontiff was overheard muttering at a press conference, “I won’t stop drinking them, though. They’re (expletive) delicious and they don’t even come in the red cup, so it doesn’t count, sort of.”