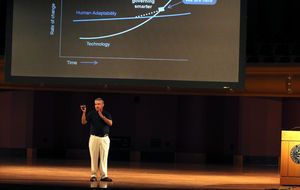 A world-renowned journalist for the New York Times, Thomas Friedman’s 37-year career includes three Pulitzer Awards and six best-selling books, including From Beirut to Jerusalem and The World is Flat. On Aug. 31, Friedman came to Notre Dame and delivered a lecture titled “The Big Trends Shaping the World Today: Economics, Technology and Geopolitics” as part of the Thomas H. Quinn Lecture Series hosted by the Mendoza College of Business.

Friedman opened by introducing his new book, Thank you for Being Late. The book tells the story of Hisu, a parking attendant who, when Friedman befriended him in a Bethesda parking lot turned out to be an Ethiopian activist and blogger read in over 30 countries.

“Now, I thought, the parking guy is my competition,” Friedman joked. Friedman offered to teach Hisu how to write a column for the New York Times, and he told Hisu that good column writing necessitates a set of personal values, an understanding of modern society — “the machine” as Friedman calls it — and how the machine, people and culture affect each other.

Friedman explained that the machine is driven by the global market, climate change and what he calls “Moore’s Law.” Friedman broke down “Moore’s Law” as representing the exponential acceleration of technological development in human history. Friedman argued that society is living at the total frontier of radical technological evolution or, in his words, “What the Hell Happened in 2007?” For Friedman and many others, 2007 represented “one of the greatest technological inflection points in history.” The iPhone launched, Facebook went global and Google bought out YouTube. Solar power and fracking also launched in 2007, and the Internet hit over one billion users.

Friedman said it is too much, too soon. Globalization as we know it “isn’t your grandfather’s globalization of shipping containers” anymore. Now it is almost entirely digital, and cyberspace has no watchdogs or governance. It has changed the nature of work, our community, our ethics, politics and geopolitics. Additionally, in this new machine, every individual has a voice in the new global cyberspace that Friedman urged “needs to be in the grip of sustainable values and the Golden Rule.” These are the keys to healthy communities that will allow us to keep up with the hurricane that is the increasing sprint of technology.

Friedman closed the lecture by quoting the chorus of folk-singer Brandi Carlile’s song, “The Eye:” “You can dance in a hurricane but only if you’re standing in the eye.”