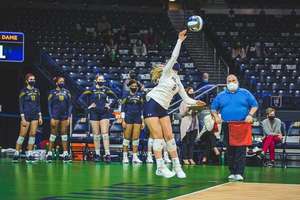 With an impressive 6-1 record at the conclusion of the fall ACC volleyball schedule, Notre Dame is ranked No. 5 heading into their spring schedule, which will allow them to compete for a national championship. In a season that was shortened by COVID-19 and limited to only specific ACC opponents, the team illustrated that a blend of returning talent and incoming stars was the perfect recipe for success.

Coming off a successful season last year in which the Irish finished with 19 wins and only 10 losses, Head Coach Mike Johnson was “fired up to get back into the gym and play” with a roster loaded with talent. Notre Dame returned preseason All-ACC selections Charley Niego and Zoe Nunez, as well as bringing in the 10th ranked recruiting class in the country that featured Aubrey Hamilton and Hattie Monson.

Opening the season against a longtime rival, the Fighting Irish easily swept the Louisville Cardinals in three sets behind strong contributions from Niego and sophomore Caroline Meuth, contributing a combined 21 kills. Freshman Monson also proved herself while she was a First Team All-American in high school with 20 digs and three aces herself. Each of the three sets was competitive (27-25, 25-22 and 26-24), but Notre Dame was able to open the season with a decisive victory. The second of the two matches against Louisville was postponed due to COVID-19 related reasons.

The sixth-ranked Irish then opened up their home slate against the fifth-ranked Syracuse Orange in what was supposed to be a hard-fought match between two talented teams. As the weekend concluded, Notre Dame added two victories to their resume in dominant fashion, as Syracuse only managed to win a single set in the two matches. Meuth and Niego continued their impressive starts to the season by combining for 69 kills over the weekend, but Nunez stole the show with 94 assists over the total seven sets of play. Heading into weekend matches against the ACC powerhouse Pittsburgh Panthers, the team was sporting a 3-0 record with only one lost set the whole season.

Having won the past three ACC Championships, the Panthers have become the most respected team in the ACC. Over those three years, the Irish have failed to even win a single set against them, having been swept in all three matches. Despite this noticeable lack of success over the last few years, Johnson’s team came ready to play and did not back down from their toughest opponent of the year. In a thrilling five-set victory that saw Notre Dame come from two sets behind to defeat the 10th-ranked Panthers, Notre Dame was without star junior Niego and required contributions from other players. Meuth added a double-double with 17 kills and 17 digs, while Monson contributed a game-high 23 digs in five sets of play.

Despite a thrilling victory on Friday evening, the Irish suffered their first defeat of the season in a revenge match for Pittsburgh. After winning the first set by a close margin (25-23), Notre Dame dropped three straight in a complete performance by the Panthers. While a younger team may have let the first loss of the season turn into many more, the team turned it around the following weekend with a road sweep of the Boston College Eagles in the first match of the double-header. Just two days later, the Irish put in another strong effort in a four-set victory over the unranked Eagles.

As the team awaits news of how their season will continue in the spring, there is plenty for Coach Johnson to build on with a strong nucleus of young and returning talent. Notre Dame proved that they can play with anyone in the ACC this fall, but a non-conference spring slate promises to bring challenges of its own. Still, there is plenty for the Irish to celebrate as they achieved their highest ranking in the AVCA Poll in program history, had their best seven-game start to conference play in recent memory and found depth in the addition of the talented freshman class.

Looking forward to the spring season, Notre Dame will once again have the opportunity to compete for a national championship after falling to UCLA in the first round last year.