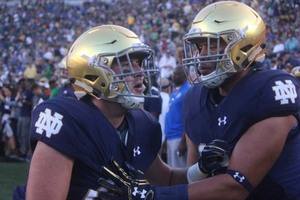 “Obviously a tough loss, guys battled real hard. When you get yourself in that kind of hole it’s hard to dig out against a really good team. Michigan State, give them great credit they came up with more plays today than we did.” - Coach Brian Kelly

It looked like a Michigan State blowout early, but the game turned into a thriller after a furious rally by the Irish on Saturday, Sept. 17. Notre Dame came into the game as 7.5-point favorites, but ultimately lost by eight points, with a final score of 36-28.

Both offenses struggled in the first half, and it turned into a field position battle. The Irish struck first in the opening quarter with a 10-play, 91-yard drive capped off by DeShone Kizer’s 14-yard touchdown run. The first quarter ended 7-0.

On the second play of the second quarter, the Spartans had a third-and-10 at the ND 22. A pass from quarterback Tyler O’Connor was picked off by Irish safety Devin Studsill. The Irish could not capitalize, however, going 3-and-out. This is where the momentum of the game began to shift. The Spartans went 3-and-out as well, but the MSU punt touched Notre Dame receiver Miles Boykin, giving the Spartans the ball at the ND 38.

On the very next play, O’Connor took a shot down the field and found wide receiver Donnie Corley for a 38-yard score. Irish cornerback Cole Luke nearly had an interception but Corley snatched it away. Riding this momentum, the Spartans shifted out of their extra point formation, and wide receiver Matt Macksood found tight end Josiah Price for the 2-point conversion.

No one else scored until late in the first half when the Spartans conducted an 11-play, 92-yard drive capped off with a shuffle pass to wide receiver R.J. Shelton, who was coming in motion. MSU led 15-7 after one half of play.

The Spartans ran the ball with limited effectiveness in the first half, but the running back duo of L.J. Scott and Gerard Holmes began to gash the Irish defense in the second. A 3-yard Holmes touchdown run gave MSU a 22-7 lead, and after a Kizer pick, L.J. Scott scored on a 9-yard run 3 plays later. After an Irish punt, Holmes broke free for a 73-yard touchdown run. With 3:45 remaining in the 3rd, it looked like a rout: 36-7 MSU. The Irish began airing it out and found success.

With six minutes remaining in the game, the Irish had cut the score to 36- 28. Their momentum was halted here, however; facing a fourth-and-7 at their own 32 with 3:37 remaining, the Irish elected to punt. But they would not get the ball back. The Spartans converted a big third-and-7 when O’Connor found Corley for 28-yards. The Spartans came away with a 36-28 victory. The Irish fell to 1-2 on the season.

Despite the disappointing score, some Irish players achieved career highlights. Kizer completed 20/37 for a career-high 344 yards, two TDs and a pick. He also rushed for two scores and helped bring the Irish back from a massive deficit. Irish punter Tyler Newsome had a season long 54-yard punt, and then followed this up with a 71-yard bomb, the longest punt for an ND punter since 1998.

Player of the Game: DeShone Kizer