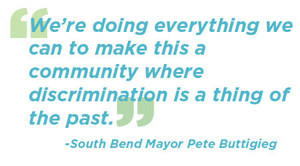 On Sept. 12, the St. Joseph County Council passed an interlocal agreement that, once signed, will redirect cases of discrimination within the county’s limits from Indianapolis agencies to the South Bend Human Rights Commission.

The agreement arose as an enforcement mechanism for the St. Joseph County Human Rights Ordinance, which, signed into law in February 2017, aims to protect county citizens against discrimination based on sexual orientation, gender identity, race, religion, sex, ethnicity and other characteristics. e protections apply to employment, education and housing.

Prior to the interlocal agreement, discrimination complaints under the Human Rights Ordinance were managed by the state, raising questions regarding the authenticity of the ordinance’s enforcement since the state does not offer the same protections that are provided locally.

By a vote of six to three, however, St. Joseph County council members are temporarily easing such worries.

South Bend mayor Pete Buttigieg said the interlocal agreement is currently moving through the budget process and should take effect in the new calendar year.

“It’s very important to us that there be that kind of enforcement,” Buttigieg said. “The opportunity to handle it county-wide really levels the playing eld and makes even more people feel like they’re under that same protective cover as city residents have enjoyed for some time thanks to the commissions.”

Led by Buttigieg, in 2012 South Bend expanded its own Human Rights Ordinance to include sexual orientation. Buttigieg said he believes showing that the ordinance didn’t result in any of the harms cited by opposition groups made it easier for the county to follow suit with its own protections.

“Indiana has had its struggles when it comes to demonstrating that we’re a welcoming place,” Buttigieg said. “So when there are those kind of challenges at the state level, it’s doubly important to make sure that, at the local level, we’re doing everything we can to demonstrate our commitment to equal treatment and equal opportunity under the law.”

Though South Bend’s e orts in 2012 faced considerable opposition, Buttigieg said the interlocal agreement seems to have “pretty broad support.” He believes the attention will now turn not just to managing the caseload but to continuing the education — making sure that there’s an understanding about what the rules are and that people know their rights.

“[We’re] doing everything we can to make this a community where discrimination is a thing of the past,” Buttigieg said. “We’re not there yet, but along with the rest of the country, we’re making progress and I think it’s never been more urgent to try to head these things off before they ever reach the point where people feel the need to le a complaint.”

County-wide cases will be investigated for free by the South Bend Human Rights Commission until May 1, 2018. According to a South Bend Tribune article published on Sept. 13, annual costs could reach up to $52,000 if a full-time investigator needs to be hired.

Executive Director of the Human Rights Commission, Lonnie Douglas, said he and the commission feel prepared to take on the county’s discrimination cases and put into place a more permanent interlocal agreement.

“You don’t have to wait until you get a le charged against you or you feel like you’ve experienced discrimination to come and see us,” Douglas said. “We’d rather help you resolve an issue before it becomes a major problem than to deal with the problem afterwards, because sometimes resolving the issue is a win-win. Dealing with it could easily be a lose-lose.”

Douglas said it was great to see the county ruling come to fruition because he believes state agencies don’t know what really transpires in the county or how the people are in the county.

“They’re just doing a job and that’s the way they look at it,” Douglas said. “We look at it [in terms of] we live here, we want this community to be the best community that there is, we already feel partially dedicated so we’re going to do the best that we can to help make this community better and to educate the entire community.”

In a statement issued before the interlocal agreement passed, Notre Dame Student Government publicly announced its support for both the Human Rights Ordinance and the agreement.

The statement, which called the interlocal agreement a demonstration of the county’s “serious and important commitment to creating a community in which all people can thrive free from discrimination,” was devised in part by student government’s director of community engagement and outreach, senior Adam Moeller.

Moeller said student government’s support came from both its desire to be involved in the community’s “good decisions” and its acknowledgment of the students originally from the South Bend area.

“Part of what we want to do in student government and particularly in my department is to retain more students in this area [after graduation],” Moeller said. “We believe that in order to do that, we have to be a part of making South Bend as welcoming and as inclusive of a place as possible so that more people — more college students — will want to make South Bend home for a longer period of time.”

Moeller said he and about eight other Notre Dame students attended the County Council meeting to encourage and reaffirm council members’ decision to vote in approval of the agreement. After announcing his and student government’s support at the meeting during a public response session, he said several people approached him to laud his and the other student attendees’ support.

“I’m not claiming that we changed anyone’s minds, but a big reason why we wanted to show our support is because Notre Dame, for better or for worse, has a lot of clout in this area,” Moeller said. “We wanted to show that we’re a part of this community and we care about this community. I felt very listened to and I think everyone did."