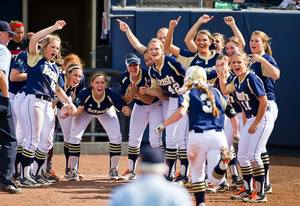 The date is March 20. The Notre Dame softball team has a record of 12-13, and they are 1-5 against ACC opponents. They have lost five of their last seven games. Most recently, they have lost their three-game series against #1/2 Florida State by a combined score of 28-0. Earlier, they lost two heartbreakers to Georgia Tech. Both showdowns went into extra innings, ending with a final score of 8-7 and 9-8, respectively. At this point, Notre Dame, the team that was projected to finish third in the ACC, was struggling. Things were looking up, however, as they were heading home to South Bend for a five-game home stand at Melissa Cook Stadium. Indeed, the Fighting Irish felt the effects of home-field advantage as they won all five games: one vs. Michigan State, three vs. Virginia Tech and one vs. Eastern Michigan.

On Wednesday, March 22, Notre Dame played their first true home game of the season against the Michigan State Spartans. Starting in the circle for the Irish was the junior lefty Katie Beriont, who came into that game with a record of 2-5. She pitched three innings, allowing only one earned run and three hits. The senior Rachel Nasland also pitched well, as she dealt two innings letting up two hits and two earned runs. Offensively, Notre Dame exploded right out of the gate. They scored four runs in the bottom of the first inning, thanks to a bases-loaded double from the junior shortstop Morgan Reed as well as a single from the freshman Katie Marino. Marino was not finished: She ended the day with two hits, two RBIs and three outstanding defensive plays. She made two diving plays to field tough ground balls in the infield, and she made an outstanding catch in the foul territory by right field. Another freshman, catcher Madison Heide, also excelled — notching up three RBIs, one of which was the game- winning run. Notre Dame won by a final score of 11-3 in five innings.

The win over the Spartans made the Fighting Irish 13-13 as they prepared to take on the Virginia Tech Hokies in a three-game series. Notre Dame was last in the ACC in batting average at the time, while VT led the ACC in home runs. Virginia Tech, too, had a disappointing start to ACC play, as they were 3-6 in conference. Both teams were ready to play, viewing the series as a golden opportunity to get back on track. First, there was a double-header on March 24. Notre Dame won the first 6-1, thanks to a stellar complete game by Rachel Nasland. Offensively, nine of Notre Dame’s 10 hits came from hitters 5-9 in the batting order. While the big names for ND didn’t produce, Kimmy Sullivan, Melissa Rochford and Sara White each hit two-run home runs, accounting for all of Notre Dame’s RBIs. In game two of the series, just a half-hour after the conclusion of game one, ND didn’t miss a beat offensively. They scored nine runs on 13 hits, four of which came from the leadoff hitter, Karley Wester. The senior center-fielder became the all-time hit leader in Notre Dame softball history with her infield single in the first inning. In the circle, Katie Beriont got her second straight win at home, as she pitched a complete game and had two strikeouts. ND won 9-1 in five innings. After pitching on Friday, Rachel Nasland was back in the circle for game three on Saturday. Despite throwing 107 pitches the day before, Nasland threw another complete game, this time tallying a whopping 113 pitches. Although she let up four earned runs, her offense helped her out, allowing her to get another win. In particular, the six and seven hitters, Katie Marino and Kimmy Sullivan, combined for five hits and four RBIs. The Irish completed the sweep of the Hokies, winning the third game 9-4. They outscored VT 24-6 in those two days, moving their ACC record to 4-5 and giving the team supreme confidence and momentum.

Notre Dame was not done yet. The only thing that stood between them and a three-game series at Louisville was a midweek non-conference matchup vs. Eastern Michigan. The Eagles sat at 12-14 and 1-2 in the MAC, but nonetheless proved to be a tough opponent. Through 4 1/2 innings, the game was scoreless. Then, the ever-reliable Karley Wester got on base with a walk, advanced to second with a steal, to third on a groundout, and scored on a sacrifice fly from Caitlyn Brooks. Notre Dame only registered three hits and one run, but thanks to an outstanding combined pitching effort from Katie Beriont, Caitlyn Brooks, and Rachel Nasland, Notre Dame won by a final score of 1-0.

Notre Dame has now won five games in a row, all at home. They improved their record from 12-13, 1-5 in ACC play to 17-13, 4-5 in ACC play, as of Scholastic going to print. Being home in South Bend proved crucial to the team, as many players, such as Melissa Rochford, Katie Beriont and Katie Marino, excelled within the friendly confines. Now it remains to be seen if they can carry this momentum into their upcoming games versus North Carolina, Detroit Mercy, IUPUI and NC State.