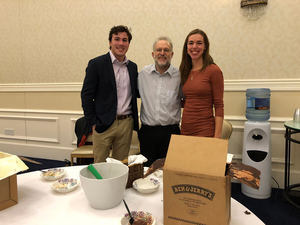 Fifty-five years ago, two grade school boys self-described as “the two slowest, fattest kids in the class” met while running the mile. They went to different colleges; only one graduated. After college, they reunited in New York, “failing in everything [they] were doing.” Then they learned how to make ice cream from a $5 correspondence course and founded an ice cream shop in Burlington, Vermont.

Those boys were Ben Cohen and Jerry Greenfield. The ice cream shop, Ben and Jerry’s, is now one of America’s most well-known ice cream companies.

On March 20, Greenfield spoke at the Mendoza College of Business. His talk, “The Social Responsibility of Corporate America,” focused on the history of the company and the two men’s multi-faceted approach to running a business. Greenfield grew up in Long Island and graduated from Oberlin College in 1973. He co-founded Ben and Jerry’s with Cohen after his rejection from medical school.

During his talk, Greenfield stressed the importance of having both a caring and economically sound company. “In its most narrow view, business is seen as trying to maximize profit, [but] there’s also a spiritual aspect to business,” Greenfield said. “As you give, you receive. As you help others, you are helped in return.”

This caring, spiritual aspect to business manifests itself in Ben and Jerry’s three-part mission statement and two-part bottom line. Their product mission ensures that they produce delicious ice cream, their economic mission strives to make profit and their social mission focuses on giving back to the community. Their two-part bottom line measures both profit and benefit to the community. Greenfield and Cohen came up with these measures of success because they “felt like [their] business was just becoming another cog in the economic machine. [They] didn’t want to be involved in that.”

One way that Ben and Jerry’s combines these goals is by purchasing supplies and ingredients from sustainable, socially aware suppliers. They buy brownies from a bakery in New York that employs adults who have experienced struggles including homelessness and substance abuse. By purchasing brownies from this organization, Ben and Jerry’s supports the work that they do.

Typically, Dean’s Fellows speakers take a stand on controversial issues, such as racial injustice or ISIS. As part of their social mission, Ben and Jerry’s also participates in these discussions. The company has publically supported Occupy Wall Street, Black Lives Matter and marriage equality. “[We’re] willing to be outspoken about controversial issues. I think it takes real courage for the CEO of Ben and Jerry’s to do those things,” Greenfield said.

The international corporation Unilever bought the company in 2001, despite Greenfield and Cohen’s wishes to remain independent. Today, they have jobs at the company but are no longer involved in its operation. Greenfield concluded: “We’re Ben and Jerry, that’s all we are.”