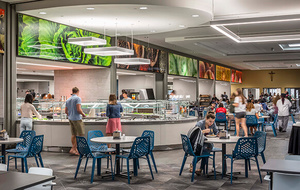 Among the daily sounds of campus life is a new one this year: the rumbling of stomachs. Labor and food shortages have limited dining services at Notre Dame, leaving students with longer lines and fewer options.

“I’m just frustrated,” said first-year Ana Batten. “I went to the dining hall because it was one of the only options open and there was a huge line.”

Campus administrators blame the pandemic for the culinary chaos. Campus staples, such as Starbucks, Au Bon Pain (ABP) and Modern Market have limited hours of operation, making these eateries even busier when they are open. The dining halls are closed in the late afternoons, and normal hours of operation are characterized by bottlenecks due to the anomaly of two “first-year” classes: the sophomores who never learned the system last year due to COVID-19 and the new freshmen.

Perhaps the most impactful consequence of the shortened hours at on-campus retail locations is the creation of a new void for a product in constant, high demand by college students: coffee.

On Sundays, the day of the week notorious for all-day study sessions fueled by caffeine, Starbucks in LaFortune Center closes at 4 P.M. What’s a pre-exam all-nighter without pumping a couple shots of espresso through your veins? A valiant but exhausting effort.

Hesburgh Library’s ABP used to operate well into the night on weekdays, allowing for the purchase of late night snacks and beverages amidst studying. Now, the establishment closes at 3 p.m. on Sundays and at 6 p.m. on weekdays, leaving library goers without their late night caffeine fix.

Luis Alberganti, senior director of Campus Dining, says that they are implementing creative solutions to meet demand by “revising wages, adding student labor, partnering with high schools and, most importantly, referring staff to bring co-workers.” In theory, these efforts being made on the dining hall front will have a trickle down effect on the retail dining locations.

The lines will get shorter as students become more familiar with the overall dining experience, Alberganti adds, and if they want to go a step further, there are still 120 jobs to fill. Until then, Alberganti asks for patience, as he is confident dining at Notre Dame will get better in the near future.

“We have a phenomenal team,” he said. “We have heroes in our staff. We’re exploring things we never explored before.”