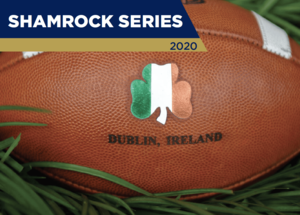 A rivalry steeped in tradition and mutual respect will travel overseas for the third time when the Notre Dame Fighting Irish and Navy Midshipmen face off in Ireland this fall. This marks the 10th Shamrock Series game, Notre Dame’s home-away-from-home series. Aviva Stadium in Dublin will host the 2020 Aer Lingus College Football Classic on Aug. 29.

The historic rivalry was originally comprised of what Rev. Matthew Walsh, C.S.C. dubbed a “football triangle” of academic and athletic excellence The relationship extends beyond football, however. Navy established the V-12 Navy College Training Program in order to alleviate Notre Dame’s financial troubles during the World War II era. Notre Dame returned the favor in the sixties when it retained its Naval ROTC on campus despite many universities’ abolishment of their ROTC programs due to the Vietnam War. Since then, the two schools have maintained a positive relationship both on and off the football field.

Navy was especially enthusiastic about the previous matchup in Dublin in 2012. Notre Dame’s Director of Athletics Jack Swarbrick said that “the people of Ireland were incredibly welcoming and made our time on the Emerald Isle unforgettable. It wasn’t long after our return from that trip that Navy initiated conversations with the hopes of bringing this matchup back to Dublin. Chet and his staff at Navy deserve a ton of credit for making this a reality.”

It wasn’t just the Navy program that wholeheartedly embraced the international experience: over 35,000 Navy and Notre Dame fans traveled to Dublin eight years ago to witness the storied rivalry game amid the rich and hospitable Irish culture. Both teams expect a strong turnout for the 94th Navy-Notre Dame game. That number might be even higher, however, following last October’s announcement.

On Oct. 5, College GameDay announced that it will travel to the annual rivalry game in Dublin. In 1993, Notre Dame was the first institution to ever host the event. While GameDay has established a legacy of traveling to various college campuses that broadcast their unparalleled spirit and passion for college football, this marks College GameDay’s first international appearance and its latest milestone. Chris Fowler, Kirk Herbstreit and Maria Taylor, are all expected to attend and call the game.

Such a storied rivalry, coupled with the presence of the iconic College GameDay, is sure to create a historic and unforgettable gameday experience.