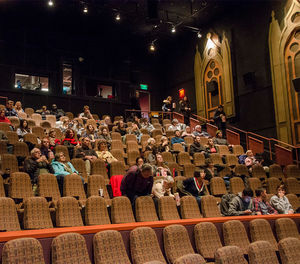 Early February ushered in the annual ScreenPeace Film Festival, an effort to educate members of the Notre Dame community on issues of peace and conflict resolution studies. Although the first day of the three-day festival was cancelled due to a blizzard, the remaining films — “Disturbing the Peace,” “500 Years” and “Human Flow” — were still shown on the final two days. The festival, sponsored by the Kroc Institute for International Peace Studies and the DeBartolo Performing Arts Center, took place at the Browning Cinema.

The films dealt with topics ranging from the Israeli-Palestinian conflict to corruption in the Guatemalan government. On the final day of the festival, attendees gathered to watch Ai Weiwei’s “Human Flow,” a documentary about the global refugee crisis. The nearly two-and-a-half-hour film records the plights of refugees around the world, discussing the stories of migrants from Afghanistan to South Sudan. “Human Flow” follows a diverse range of ethnic groups as well as nations, many of which the news media discusses each day — the Rohingya in Myanmar, Palestinians in the West Bank and individuals living under the ISIS regime, for example.

“Human Flow” touches on the many tragic elements of the refugee existence — persecution, the disease and logistical tribulations associated with travel and the harshly monotonous lifestyle of refugee camps — and aims to present the world as one human family. Accordingly, its showing provoked an emotional response from many viewers. “As the daughter of a family of refugees, ‘Human Flow’ moved me to tears with its emotionally raw stories of those fleeing for a better life,” said sophomore sociology major Kathleen Lor. “The film reminded us that we are all human beings at our very core, and all of us deserve human rights, dignity and respect.”