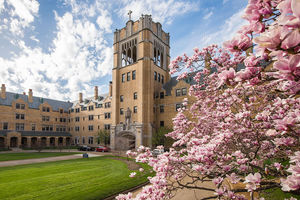 In a long-held secret and strategic move, Saint Mary’s College cut ties with the University of Notre Dame earlier this month to become a completely independent academic institution, and it seems to be thriving as a result. U.S. News’ and World Report’s college rankings has updated to reflect the change, and Saint Mary’s College has been ranked above Notre Dame in every aspect of academia.

According to in-person interviews conducted by the Scholastic staff, Saint Mary’s students have overall seemed to love the change. “It is so freeing not having to watch every trivial Notre Dame football game,” senior Sarah Mulaney said. “I’ve truly been able to appreciate the academia in my education major.”

Other interviewees reflected similar enthusiasm. “Once we gave up the Notre Dame habit of texting while walking and actually started interacting with our classmates, school became a breeze,” sophomore Bella Griffin said.

Bella’s friends agree. “Now that we’re no longer commuting back and forth to Zahm for the weekends, I can get enough sleep to truly appreciate all the hard work our professors put in,” sophomore May Superior said.

This academic change is especially prevalent amongst business majors. Saint Mary’s School of Economics, Business and Marketing, now dubbed by St. Mary’s student as “evidently better than Mendoza,” has increased its graduation rate to 99 percent. Their graduates are now getting more interviews at Deloitte than Domers are. Chad McMurphy, a Mendoza junior, spoke toScholastic about the change. “It hurts to hear Deloitte is prioritizing academics and interpersonal skills over familial connections,” he said.

Saint Mary’s declaration of independence has also impacted the local community of South Bend. Staff at the Linebacker, Palace and other famed South Bend weekend locales have noted a significant decrease in attendance on weekend nights; one can only hypothesize this is because St. Mary’s students no longer feel the pressure to keep up with Notre Dame students in terms of drinking.

Overall, this independence has striking implications for both St. Mary’s and Notre Dame students. One can only speculate as to what Saint Mary’s will do with this newfound freedom.