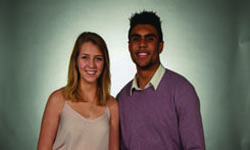 Politics is promises. Amid the election buzz, Corey Robinson and Becca Blais promised action and change a year ago.

As their administration draws to a close, Robinson and Blais have raised the profile of the executive office of Notre Dame Student Government to new heights.

From the onset, the novelty of a former Division 1 athlete serving as student body president brought new attention to the actions of the Robinson-Blais administration. Transparency and visibility became themes that ran through the entire term.

“The most lasting impacts that have been made by student government administrations have been made in policy,” Blais, a veteran of Judicial Council and Executive Council, told Scholastic last year.

A primary focus has been a commitment to improving the initiative to end sexual assault on campus. Safety has been a priority of the administration. In September, student government partnered with the Notre Dame Security Police (NDSP) to rebrand O’SNAP to SafeBouND.

In the eyes of student government, O’SNAP had been abused by partygoers and was not necessarily addressing its main objective: providing safe transport to students who feel uncomfortable travelling alone at night.

“Through the rebranding, we hope that the students who need the service most will have better access to it,” the pair said when announcing the initiative.

Robinson and Blais have addressed such safety concerns through executive action while also continuing to support the wider “It’s On Us” campaign to end sexual assault.

One way they have done so is through opening dialogue on sexual assault, along with other issues, with October’s “Race Relations Week” just one example of this.

In the lead-up to the presidential election, the administration hosted an unprecedented weeklong discussion of “the intersection of race, faith, community relations, education, politics, gender and sexual violence.”

Another key policy initiative Robinson and Blais are proud of is the creation of and community formed by the Sexual Assault Survivor Group — the first-ever support group resource for Notre Dame and St. Mary’s students, according to Blais. “We think it has made a positive, long-term impact in the community,” she says. “It has encouraged our survivors and you can see that by the number of reports, [they] actually went up this semester — so it’s not like sexual assaults are happening more, it’s just that people are reporting it more.”

While Blais will advocate through her current presidential bid for any aspects of their original platform that weren’t realized, one specific initiative stands out. “If we had more time, we would explore the opportunities of revamping the Rec Sports fitness class system,” she says. “We currently have our University Affairs department from our cabinet working on this project, but with more time, we could devote ourselves to bigger policy changes regarding Rec Sports.”