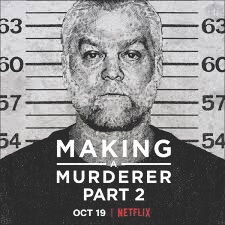 Following the release of the wildly popular Netflix documentary “Making a Murderer,” there

came an outcry for justice and answers. As the cases of Steven Avery and Brendan Dassey remain ongoing, the second part of the series will keep the audience updated.

In the second part of the series, there is an increased focus on the defendants’ families, who are from the lower-middle class. The documentary’s candidness tries to demonstrate a systematic disadvantage for people of similar backgrounds in the United States justice system.

Bright stage lights illuminated the deep red curtain drawn across Washington Hall’s stage. Excited whispers filled the audience as they anticipated the opening-night performance of “The Addams Family,” directed by junior Joseph Larson. The student-run Pasquerilla East Musical Company (PEMCo) puts on two musicals each year and, as the show ran from Oct. 25-27, with Halloween just around the corner, the cast told the story of everyone’s biggest fear — falling in love.

It was hard to believe that this show was put together in only one month, as the cast flawlessly executed their lines and dance numbers; the candid and raunchy humor of each character drew uncontrollable laughter from the audience. Morticia and Gomez’s conflict over Wednesday’s love life offered drama, which was heightened by argumentative musical duets. Grandma Addams and Fester served as the source of constant comedic relief. Wednesday Addams and Lucas Beineke’s persevering love, despite the odds of a not so “normal night,” was uplifting.

The talent of the students who contribute to PEMCo is undeniable and I look forward to the upcoming spring show: “Guys and Dolls,” directed by sophomore Alison Croucher.

With her music, Mitski consistently puts herself under the microscope. Her emotions. Her insecurities. Her flaws. In a sense, nothing, and everything, has changed on “Be the Cowboy”.

Contrary to her previous album, “Puberty 2,” Mitski discards the distortion in favor of showcasing raw vocals. Breaks, cracks and all. On “Be the Cowboy,” Mitski grapples with the irrational actions that inextricably come with passionate love — of fame or of another.

From pleading to a past lover on “Why Didn’t You Stop Me,” to showcasing the inability to connect with a partner on “A Pearl,” Mitski leaves it all on the table. In “Nobody,” a disco-esque instrumental backing propels the album’s second half with the bounciest song about visceral loneliness you’ll hear all year.

Over her career, Mitski has become the master of transporting the listener through poignant musical vignettes. On “Be the Cowboy,” her talent has never shone clearer.

How I Learned to Drive

Two weeks ago, in Washington Hall’s black box theater, with the audience sitting so close they could almost touch the actors on three sides, Notre Dame’s Student Players performed Paula Vogel’s heart- wrenching, emotionally charged play, “How I Learned to Drive.” The story follows “Li’l Bit,” a young woman growing up in rural Maryland, who struggles with a restrictive, misogynistic family and the sexual advances of her Uncle Peck, who is simultaneously her abuser and the only character to support her educational aspirations. He is also the man who teaches her to drive, and the car becomes both the site of her violation and her avenue to freedom. Jumping back and forth in time, the play highlights various moments of Li’l Bit’s life at home, at school, and with her Uncle Peck, exploring their deeply exploitative relationship, the power dynamics of abuse and the complexity of every character. The play, directed by junior María Amenabar Farias, was entirely student-run and produced. The actors, led by junior Teagen Earley, brought the anguish, moral ambiguity and cultural commentary to life with such sincerity it left me holding my breath and thinking deeply long after I left.

The Hate U Give

Based on Audrey Wells’ novel, “The Hate U Give” is a film that explores racial injustice in America, telling a story that feels far too familiar but is nonetheless haunting. Starr Carter (Amanda Stenberg) witnesses the murder of an unarmed childhood friend, Khalil Harris (Algee Smith), at the hands of a police officer who, because of rampant and dangerous racial profiling, horribly mistakes a hairbrush for a gun. Violence from the police and local gangs, racism in the private school Starr attends and the painful and needless loss of her friend push this brave young girl to activism.

Protesting after a grand jury fails to indict the police officer on murder charges, Starr’s words echo long after leaving the theatre. “No matter what we say, no matter how loud we shout, they refuse to hear us.”

This story is one that reflects a culture of hate, ignorance, and violence. It is a siren call for change and a story to which every person must bear witness. “The Hate U Give” is a must-see.

Whether it’s listening to their music, believing we were born in the wrong generation or hearing their name in passing, most people know of the show-stopping band Queen. Nevertheless, the story behind Queen, specifically the personal life of lead vocalist Freddie Mercury, is still a mystery to many people. The newly-released movie “Bohemian Rhapsody” shows a glimpse into the life of the face of Queen, while never losing sight of the story of the band as a whole.

This film was years in the making, but the wait was well worth it for this cinematic masterpiece. If you weren’t already a fan of Queen, don’t be surprised if you find yourself tapping along to catchy beats and craving more. This movie is a must-see, a spectacle — a beautiful portrayal of a man and a band that revolutionized the perception of music.