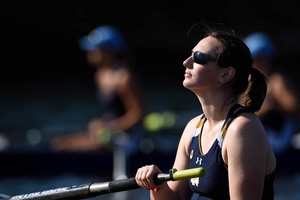 A dance on the dock to her favorite song. “I Am a Champion” signs affixed to the rowing machines. A challenge to see how many miles can be rowed in her memory.

These are just some the ways that Ailish Sheehan, Notre Dame class of 2015, is being remembered.

Sheehan was a vibrant spirit, an All-American rower, a passionate artist and a dear friend. On Sept. 9, she passed away after sustaining head injuries due to a fall on a footpath in Poznań, Poland.

“‘Devastated’, ‘torn up’ are some words,” said Marnie Stahl, associate head coach of Notre Dame women’s rowing. “We knew that the accident wasn’t good. We knew she was in a fight coming out of that accident. We were pretty devastated and pretty shaken by it, but I would also say that the team really rallied together.”

The injuries occurred mere hours after Sheehan and her teammates in Great Britain’s four-man boat claimed a bronze medal in the World University Championships. After the tournament, Sheehan had planned to attend the dedication on Sept. 10 of the new McConnell Family Boathouse that will house the Notre Dame women’s rowing program.

“She was supposed to be here this evening — that was her plan — to celebrate this new facility she was truly enthusiastic about,” Kidder said. “Ailish and her classmates were actually the first ones at Notre Dame to go all four years to the NCAA Championships.”

Sheehan’s funeral was on Sept. 17 in Kildimo, Ireland near her home in County Limerick before her cremation the following Monday. Ten Notre Dame coaches and student-athletes traveled to Ireland for the ceremony. A 23-year-old resident of Limerick, Ireland, Sheehan was working toward making the Great Britain senior team for the World Rowing Championships in Florida in 2017. Her ultimate goal was to make Great Britain’s team for the Summer Olympics in Tokyo in 2020.

She was a talented artist pursuing a master’s degree in design and environment at Goldsmiths, University of London. Sheehan wanted to fuse art and education by teaching how to build gardens and live sustainable lifestyles.

Jim McConnell and his wife Lisa were the lead benefactors for the new boathouse, and they gave a touching tribute to Sheehan and the legacy she leaves behind. Sheehan rowed in the same boat as the McConnell’s daughter Erin in 2012.

“I spoke with Erin today and she talked about how Ailish was so fun-loving and such a free spirit,” Jim McConnell said. “She was an amazing teammate and always a positive force no matter the circumstances.”

The Notre Dame rowing team is still formulating plans on how to honor Sheehan during their spring season. For now, there is an erg challenge between Notre Dame, Goldsmiths and Sheehan’s club in Limerick to see how many meters they can row for Ailish.

In addition, the team will remember her by the “I Am a Champion” signs that Sheehan attached to the rowing machines at Notre Dame prior to graduation.

“That’s the person that she was,” said Stahl. “Just an unbelievable spirit and always wanting to be better, always being positive.”

On the morning of Sept. 17, Father Joe Kerry celebrated a memorial Mass at the McConnell Family Boathouse. Later that day, the university held a moment of silence for Sheehan before the kickoff of the Notre Dame- Michigan State football game.

But perhaps the most poignant celebration of Sheehan’s life came on the night after her death, when her teammates and coaches celebrated the dedication of the McConnell Family Boathouse. The student-athletes played Sheehan’s favorite song, the 1984 Footloose hit “Holding Out For a Hero” by Bonnie Tyler, and they danced on the dock as a team in a celebration of her spirit.

“I’ll remember her with a smile,” said Stahl. “She’s just an amazing spirit that makes you want to live life to the fullest and make a difference and be a light for other people. For me personally, it’s about embodying her spirit a little bit more: just enjoying the moment and laughing and dancing and just enjoying what’s in front of you.”