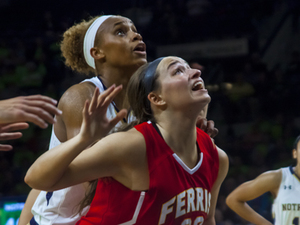 Twenty appearances in the NCAA tournament. Six trips to the final four. Three runner-up trophies. One championship title. All within the past twenty years.

Names hang on banners in Purcell Pavilion, marking the standouts that have brought the Notre Dame women’s basketball team to continued success. Past players like Skylar Diggins (’13), Kayla McBride (’14) and Natalie Anchonwa (’14), who led Notre Dame to consecutive Final Four appearances, now reign among the greats.

Over the past few seasons, the departure of star players has not created a drop off in success. Despite losing McBride and Achonwa last season, the team is ranked third in the country in the preseason Associated Press rankings and USA Today Coach’s Poll. The team continues to reach the Final Four and compete for National Championships, a pattern that could be attributed to both coaching and recruiting.

Assistant Coach and Recruiting Coordinator Niele Ivey is responsible for assembling talented freshman classes. “I plan basically all of Notre Dame women’s basketball’s recruitment programming,” Ivey says. “We have three big weekends for recruitment, the weekend of July 6, a fall weekend and a spring weekend. July is our biggest period of recruitment.”

For 18 consecutive years, Irish recruiting classes have been ranked in the top 25 in the nation. Ivey helped elevate that ranking into the top ten for the past three years. “Being in the Final Four three years in a row really brought a lot of attention to the program. We’re the final team that people see, so we’re always in conversation. It allows us to recruit nationally,” Ivey says. 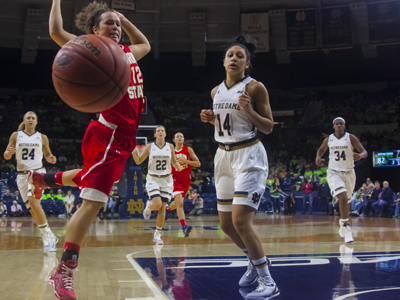 The class of 2014 may be one of the best groups of recruits yet. Brianna Turner, Mychal Johnson and Kathryn Westbeld were each ranked among the nation’s top twenty players. Turner was voted Gatorade Player of the Year, and she spurned offers from Stanford, Connecticut, Duke and Baylor to wear the Irish jersey. This recruiting class was ranked as high as third in the nation.

In the team’s 92-32 exhibition win against Ferris State on Nov. 5, Turner recorded a double-double with 13 points and 10 rebounds in 20 minutes. Johnson scored 15 points in 24 minutes and earned praise from Head Coach Muffet McGraw.

“[Recruits] see what our coaching staff has. The way we develop players is something that I think sets us apart from other teams. Players like to know they will be developed and prepared for the next level, and at Notre Dame, you know you can become an All-American and be drafted into the WNBA,” Ivey said.

Turner says recruitment visits and communication with the team turned her attention towards South Bend.

“I had watched Notre Dame in the Final Four but really knew nothing about them,” Turner says. “It was really the visit. Notre Dame just literally felt different. As soon as I got to campus, I knew this [was] for me.”

The combination of tradition, athletics and academics is one of the main draws for prospective students and players, Ivey says.

“You can play in a NCAA Championship game and receive a bachelor’s degree from the University of Notre Dame. I think we have the best academics in the country, and that sets us apart from other schools,” she says. “For us, we weed out a lot of players based on what is important to them. It’s the best of both worlds.” 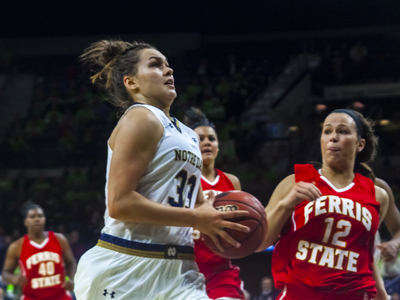 “The coaching staff is really consistent, always wanting us to get better,” Turner says. “They push us to go hard all the time.”

“We all know each other so well. It’s a huge family atmosphere between the coaches,” Ivey says. “We all have such great respect for Coach McGraw. She does a really good job of developing her coaches. We all love her so much that we work above and beyond.”

Associate Coach Beth Cunningham and Ivey both have advantages as alumna of Irish basketball.

“I have a great relationship with the kids, I walked in their shoes. Winning an NCAA Championship and playing in the WNBA — that’s what they aspire to do. They have a high level of respect for me. [Beth and I] complement each other, and she’s very relatable to our girls,” Ivey says.

“I think we’re going to be really good not just now, but down the road.”