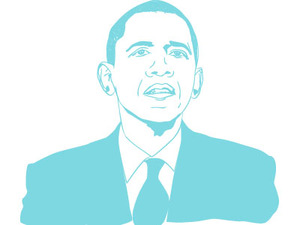 WASHINGTON — In a bipartisan effort to bring together opponents in an increasingly fiery election season, President Barack Obama invited all remaining presidential candidates to the White House on Thursday. Sources say the president was in high spirits throughout the day, cooking a roast with First Lady Michelle Obama and teaching Vice President Joe Biden how to make ice cream.

“There were tears in his eyes,” eyewitnesses said of Vice President Biden as he learned that his favorite food could be crafted by humans and was not, as he’d always believed, “what the fat angels lose when they go on a diet.”

The president’s mood began to dip around dinnertime, when Democratic frontrunner Hillary Clinton became the first guest to arrive. Eyewitnesses say the former Secretary of State entered by riding a BMX bike over the White House lawn, damaging “priceless azaleas” but also, the Secret Service added gratefully, “like four guys who had hopped the fence without us noticing.”

After kicking down the doors and screaming “MOMMA’S HOME,” Mrs. Clinton shook hands with POTUS and thanked him for conceding. When the president expressed confusion, Clinton clarified that she was speaking about the 2008 election, when she lost the nomination to President Obama.

“She thought he had invited her there to give her the rest of his presidency — she said he stole it from her,” an insider says.

Clinton appeared to accept defeat a second time when the situation was explained to her, but sources say she could be heard muttering “birthright” and “my precious” under her breath for the remainder of the night.

Republican frontrunner Donald Trump was the next to arrive, in a golden carriage drawn by 14-year-old Chinese factory workers.

“They love me in China,” Trump bragged as he stepped down from the carriage onto the back of a Mexican migrant (one that he “assumes is a good person,” he said). After asking the doorman to rate his daughter on a scale of one to 10 and hitting him across the face when he replied with “10,” (“The correct answer was 14,” Mr. Trump said), he shook hands with POTUS and Clinton before proceeding to slap “TRUMP TOWERS” and “MADE IN CHINA” stickers on most of the White House furniture.

Senator Bernie Sanders was third to arrive. When asked where he had parked, Sanders replied, “I WALKED. YOU KNOW WHAT CARBON EMISSIONS IN THIS COUNTRY ARE RIGHT NOW? IT’S A MESS,” before proceeding to water all of the White House’s 2,379 plants.

“Just happy to be here,” Kasich is reported to have said amicably. “Nice place.”

Senator Ted Cruz could not attend, sending an apology letter written with “a mysterious cipher that had to be sent to the Secret Service to break.”

Dinner was a raucous affair, punctuated by Mr. Trump’s repeated comparison of his own anatomy to various (“huge”) objects on the table, Clinton’s multiple attempts to lock herself in the Oval Office and “win by default,” and Senator Sanders’ relentless barrage of impossible to answer questions. (“DO YOU KNOW WHAT THE UNEMPLOYMENT RATE IN SUDAN WAS IN 1974???”)

President Obama is reported to have spent the entire affair with his head in his hands, while Vice President Biden asked whether Governor Kasich had heard that “ice cream making is for people now too.”

After the guests had departed (Trump on a gold-encrusted helicopter, Kasich in a cab, Clinton on a dragon, Sanders retreating steadily into the woods from whence he came), President Obama reportedly walked to the official White House calendar, counted days for several minutes and burst into tears.