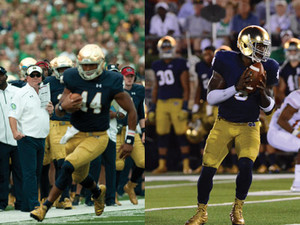 Notre Dame recruiting has continued to rank among the nation’s elite. Ever since its top five class in 2013, Notre Dame has carried the momentum generated on the field into the offseason by attracting high school talent to attend the university. The Irish have received 21 verbal commitments thus far in the incoming freshman class, including 10 four-star recruits, according to ESPN. The Irish have prioritized key positions in the trenches during the recruitment of athletes under Kelly. According to ESPN, four of the top six Irish recruits are either offensive or defensive linemen. Let’s take a deeper look at some of the high school prospects that constitute Notre Dame’s 2016 recruiting class.

The tackle from Cleveland’s Saint Ignatius High School has prototypical size at 6’5, 300 lbs. and has played against quality competition in the Ohio High School Athletic Association’s Division I. Eichenberg received scholarship offers from Alabama, Michigan, Michigan State and Ohio State, among many others. He has been rated as the top lineman in Northeast Ohio and was named to the Under Armour All-America Team, which includes 90 of the top high school players in the nation. As the pride of the 2016 class, Eichenberg will attempt to help ease the loss of the pending NFL draft selection Ronnie Stanley.

The Irish, in their search for skill position athletes, earned the commitment of wide receiver Chase Claypool. Claypool hails from Canada and would be the eighth Notre Dame player to appear in game action for the Irish from the area. He has outstanding measurable attributes that could help him earn playing time early in his career. Standing at 6’5, Claypool could team with fellow 6’5 target Equanimeous St. Brown on the outsides of spread formations to create mismatches for smaller cornerbacks.

The first commitment in Notre Dame’s 2016 class is one of its best. Kraemer pledged his commitment to the university all the way back in Oct. 2014. The tackle attended Elder High School in Cincinnati, the same program that produced former star tight end and current Minnesota Viking, Kyle Rudolph. Kraemer is another key lineman who has faced quality high school rushers in the Greater Catholic League in Cincinnati, which includes St. Xavier High School and Moeller High School, two schools that have produced Notre Dame players in the past. Kraemer and Eichenberg could become the valuable bookend tackles that are essential to any top team. Expect them to see the field within the next three years.

The brother of senior Romeo, Okwara has tremendous upside like his brother and is rated higher by recruiting services than the 2015 Irish sack leader was coming out of high school. Okwara received a lot of recruiting attention from ACC schools such as Boston College and Clemson, but chose to follow his brother to Notre Dame. Julian is nearly the same size as his brother was as a high school senior, and just a tad slower in his 40-yard dash. Romeo gained over 30 lbs. after enrolling at Notre Dame, filling in his long frame. The Irish will bulk up the younger Okwara and include him in the defensive line rotation, hoping that he provides an impact similar to his brother, who netted nine sacks to pace the Irish this past year before his 21st birthday.

The Irish have struggled at times in the secondary these past two seasons, and Spencer Perry could help weld the back end of the defense in a short time. The Irish have lofty expectations for Perry, who is tall for a safety and hails from IMG Academy, one of the most talented high school programs in the recruiting hotbed of Florida. Perry received offers from Auburn, Florida, Ohio State and Michigan. He also runs an impressive sub-4.5 40-yard dash. This impressive raw speed, an ability to react quickly to intermediate and deep routes and his recent exposure nationally as a fast rising prospect point to Perry as one of the most prominent members of this year’s class.

ABUNDANT OPTIMISM Skill position competition, such as between Malik Zaire and Deshone Kizer, should only improve the Irish.