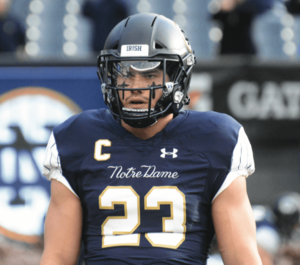 At first, seeing his desolate stare, tired eyes and dejected disposition was unexpected. It seemed foreign for a man of his strength and willpower to be so disheartened: the Drue Tranquill that Irish fans had all come to know was ostensibly not there.

But, as the Fort Wayne native began to speak, it became quickly apparent that this was the real Drue at his very best — carrying himself not only with humility but also with pride, pride for a program and institution to which he dedicated so much of himself.

“You want to go out on top ... you want to be a champion,” Tranquill said. “You train so long, put so much into it. So this one will sting for awhile. But I’m excited for what the guys have in store for them.”

Perhaps what the two-time captain said was commonplace after a humbling loss, but the way he said it was what made it uniquely a Tranquill- esque moment. Even in the fragile hours following yet another big-game disappointment, he spoke with patience, exuding the utmost maturity — a staple of his persona.

His career at Notre Dame — even through injury, time on the bench and a crushing 2016 season — will always be remembered by Irish fans as one defined by this maturity.

Over his five years at Notre Dame, Tranquill built his mind and body into the leader of a playoff football team. He totaled 292 tackles, 26 tackles for loss and appeared in 51 games for the Irish. He fought through numerous injuries — including a pair of ACL tears — and his discipline played a crucial role in his meticulous postgame recovery habits that kept him on the field, even when playing at less than 100 percent. He was named captain twice and played three seasons in which the Irish totaled at least 10 wins. Tranquill did this while also graduating with a 3.73 GPA and a degree in mechanical engineering, marrying his long-time girlfriend and all the while remaining steadfast to his faith.

To many, Drue Tranquill will be remembered as the quintessential Notre Dame man. His dedication to the Notre Dame family, as well as his persistent effort to better himself and his teammates, will forever hold him among the greats at this university.

Tranquill not only left everything on the field for the Fighting Irish, but he also was a perfect representative for the program off the field. Even in one of his lowest moments as a Notre Dame student-athlete — after giving his best effort and having it crushed by a superior Clemson team — the Tranquill that fans have grown to know over the past five years did not disappear.

Regardless of what Tranquill may do in the future — be it in the NFL or in a career elsewhere — it is certain that he will compete with outstanding character and tenacity, two traits central to his behavior both on and off the field.