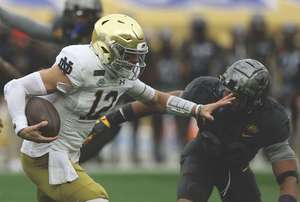 A month and a half after their first game, with a season-threatening COVID-19 outbreak in between, the undefeated No. 3 Fighting Irish were finally forced to leave the friendly confines of Notre Dame Stadium and go on the road to face the Pittsburgh Panthers.

The previous game against Louisville went down as a win, yet it was certainly a disappointing one; the Irish could muster only one touchdown in a narrow 12-7 victory against the unranked Cardinals. Especially concerning was the passing game, as Ian Book was held to just 11 completions totaling 106 yards and no touchdown passes.

A functional passing game would be crucial to avoiding an upset to Pitt, who came into the game as the nation’s top rushing defense, allowing just 61.5 yards per game on the ground. From the start, improvements were evident. Book led the Irish down the field on the first possession, ending with a 34-yard touchdown pass over the middle to Ben Skowronek, his first for Notre Dame after transferring from Northwestern.

Pitt backup quarterback Joey Yellen answered by leading the Panthers on a solid first drive resulting in a field goal to keep the home team within striking distance. However, these proved to be the only points Pitt would muster, as Yellen’s day went sharply downhill from then on.

After punting on the next two possessions, Book found Skowronek again early in the second quarter for a 73-yard house call on a gutsy deep shot facing third and 14. Skowronek would finish the game with just two receptions, but his two touchdowns and over 100 yards receiving announced his presence as an integral member of the receiving corps.

Midway through the quarter, Yellen threw the first of three picks of the day into the hands of junior linebacker Bo Bauer over the middle. The offense capitalized on the turnover with a short drive, punctuated by a Kyren Williams touchdown run with a minute and a half remaining in the half.

A minute later, defensive end Isaiah Foskey blocked a punt at the Pitt 20-yard line, batting the ball into the end zone, where he recovered it for an Irish touchdown. The Fighting Irish returned to the locker room at halftime with a 28-3 lead, dominating in all aspects of the game.

The Irish seemed fully in control, and a final flurry of activity in the third quarter put the game to bed. Book found standout freshman tight end Michael Mayer in the end zone with just over 4 minutes left in the third. On Pitt’s first offensive play following this (with just seven seconds elapsed on the clock), Yellen threw yet another interception, this time into the hands of graduate cornerback Nick McCloud.

While the defense had been strong in the four previous games, they were unable to force many turnovers, a skill crucial to winning the big games Notre Dame hoped to play down the road. This three-pick performance, albeit against a backup quarterback, was a sign that the Irish defense was capable of playing at the highest level.

After the McCloud interception, Notre Dame scored for the final time, a two-yard rush from C’Bo Flemister that ran the score up to 45-3, where it would remain until the final whistle. The fourth quarter was largely uneventful, as both teams brought in young quarterbacks, including redshirt freshman Brendon Clark, and no points were scored.

The decisive victory saw a commanding performance on both sides of the ball. Book threw for over 300 yards for the first time in 2020 in a much-needed resurgence for the passing game. Clark Lea’s defense had another impressive showing, holding Pitt to 162 total yards and no touchdowns, with the three takeaways as a significant development. Notre Dame would stay on the road for the following week, traveling to Atlanta to face Georgia Tech for a final tune-up before the anticipated matchup with Clemson.