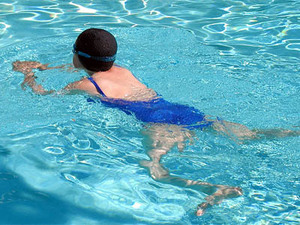 Students thought the humiliation was over after being forced to flail around helplessly in a mammoth pool while surrounded by superhuman, godlike Olympic swimmers. But it was just the beginning.

They thought that the first class, when they stood standing in a three-foot-deep kiddie pool and were told to see if they could float, was nothing but a lighthearted joke.

“I mean, I know I can’t swim, but even a four-year-old can blow bubbles,” one student commented on the first day’s lesson. (All of the swim test failers wished to remain unnamed — obviously.)

This sentiment only escalated when they spent the next few weeks practicing getting into the pool and not being afraid of the water.

Multiple students attested that they “looked up more than once to see the lifeguards snickering.”

“I’m pretty sure the floatie boards they give us don’t actually do anything,” one student said, voicing his belief that “they’re just there to make us look even more stupid.”

More than one swim class member mentioned a mild suspicion that they were being videotaped. One day, after students noticed two men watching the class from an above balcony, they were told laughingly that the men were “scouting new members for the ND swim team.”

“One time we practiced life saving,” said one participant. “ As if that wasn’t a joke in itself, they made us rescue each other. We took turns hooking each other with giant nets and reeling each other in. No one else was there, and I still felt embarrassed for myself. I’d say I’m 93 percent sure that was purely because the teacher was having a bad day and wanted a few laughs.”

Many of the students have come forward claiming they face prejudice when  others find out that they failed the swim test. This has led to the formation of a secret underground society of those who have been forced to take swim class.

“You’re walking across the quad at 3 p.m. with wet hair and a gym bag,” one member says. “You can see it in their eyes when they stare at you. They know.”

“I’m tired of having people scream ‘Look out!’ and pick me up whenever I’m walking near a puddle,” says another.

Many have begun “coming out of the closet” as swim test failers. They’re even thinking of starting a fundraiser to promote awareness for what they claim is a much more widespread phenomenon than initially perceived.

“They’re really all around you, you just don’t realize it,” a committee member commented. “OK, maybe they are actually easy to pick out; they’re usually not in the best of shape. Or tan. And they own a two-piece bathing suit. But still.”

So help raise awareness for swim test failers. Because somewhere, maybe even in your own dorm, there’s a kid who still won’t go for a run anywhere near the lakes.