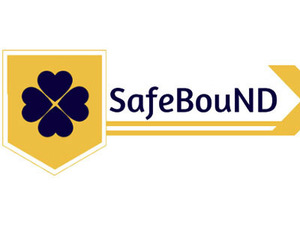 In what is for some students the third change in a campus safety program during their time at Notre Dame, O’SNAP has been rebranded to SafeBouND this year. While O’SNAP had only been in place for two years, student government and Notre Dame Security Police decided to change the program due to the high demand of calls for non-safety related reasons.

She says the program was originally meant to help students walking across campus by themselves, but due to large groups of people using the service, response times became very slow.

“While we were happy people were using it, the people for whom the service was designed were left waiting for sometimes 20 minutes,” she says.

“We expect response times, even though [the team is] on foot, to be much faster,” Skibins says.

The program starts at 9 p.m. every night. The golf cart escort ends at 1:30 a.m. on Sunday through Wednesday, but the walking escort on the weekends lasts until 3 a.m. on Thursday through Sunday.

“We will never turn anyone away,” Skibins stresses. She says if students could not walk across campus or needed transport after hours, the police force would escort them.

Students are torn on the changes to the safety program.

“I haven’t used SafeBouND yet, but I thought O’SNAP was a good system during the winter … because the weather becomes an issue,” sophomore Emily Patton says.

Patton, a resident of Howard Hall, used the program to get back to her dorm from events at the Compton Family Ice Arena last year.

“It was nice to have someone to get you back to Howard late at night,” she says. “I think I’d definitely use SafeBouND, but honestly I think O’Snap was a better system.”

Another sophomore, Madeline Weinberger, is worried about whether or not people will use the new system, which could be a safety concern in and of itself.

“I think the new system will be less likely to be abused, so that is a positive,” she says. “However, I think that people who actually need it are also going to be less likely to use it because it makes the whole thing seem like a bigger deal than it is.”

Senior Maura Doré has seen all three of the safety programs during her time on campus.

“From my understanding, SafeBouND is more of a return to Safe Walk — what we had when I was an underclassman. I understand that the golf carts of O’Snap were taken advantage of by students who would use them for convenience rather than necessity,” she says.

Doré is not without concern for the new system, however.

“I’m concerned about the efficiency of the new system because it will take much longer to walk students to and from places than it would take to drive them. So I am hoping that the same number of students can use the service and that it will be done in a timely manner,” she says.

To request a SafeBouND escort, students should call the NDSP number, 574-631-5555, give the information requested (name, location, and destination), and then wait for the escort. They will need to carry their Notre Dame ID to show the escort when they are picked up. Students are also able to use the SafeBouND app to request an escort.