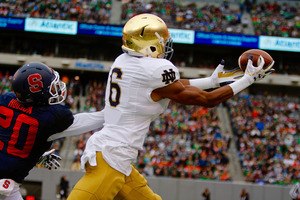 “We always try to take shots on the field. That’s just what type of offense we are. We have great receivers that can go deep and get the ball. So, we always take ourshots and are expected to make the plays.” - Equanimeous St. Brown

Following a disappointing loss to Duke and the firing of Defensive Coordinator Brian VanGorder, Notre Dame headed to East Rutherford, New Jersey to take on the Syracuse Orange in MetLife Stadium.

On the first play of the Irish’s opening drive, junior quarterback Deshone Kizer connected with sophomore receiver Equanimeous St. Brown for a 79- yard touchdown, firing the team up early. Although Syracuse would respond with a touchdown of their own, the Irish continued to build momentum by blocking the ensuing extra point and returning it for a defensive PAT, worth two points.

Three plays later, Kizer found St. Brown again, this time for a 67-yard score that put the Irish up by ten. “Oh, I think I had a pretty good day today,“ St. Brown remarked after his 182-yard receiving performance.

The Orange attempted to keep pace with another touchdown just a minute later, but the Irish responded even more quickly. Sophomore returner C.J. Sanders took the next kickoff to the house, beating a myriad of Syracuse players during his 93-yard trip to the end zone.

With the first five possessions of the game all ending in touchdowns, the score was 23-13 in favor of Notre Dame after just under five minutes of play. After such a hot start, both teams began to settle in, with no more points scored until the second quarter. Syracuse would add a pair of touchdowns before the half, but the Irish maintained their lead by contributing ten more points of their own.

Just before halftime, the revamped Irish defense, steered by new Defensive Coordinator Greg Hudson, came up big. After Kizer threw an interception that set the Orange up on the Notre Dame 34 yard line, the Irish held them to a field goal attempt, but the Orange missed.

Hudson’s unit continued to hold strong well into the second half, forcing four consecutive punts before denying Syracuse on fourth down in the red zone. Notre Dame would put 17 more points on the board as well, with freshman receiver Kevin Stepherson and sophomore running back Dexter Williams each contributing a 50-plus yard touchdown, followed by a field goal.

Although Syracuse would put a late touchdown on the board, it wasn’t enough, as the Irish bested the Orange by a final score of 50-33. Despite a shaky defensive start by both teams, Hudson’s new-look Irish defense clearly won the second half, and subsequently, the game. “It was a good team defensive effort with a lot of guys playing,” Head Coach Brian Kelly stated.

When asked how the Irish were able to find a way to win in the midst of a disappointing start to the season, Kizer said, “It’s 100 percent attitude. The whole team has had smiles on their faces. We’re dancing on the sidelines and we’re smiling. We’re getting back to what we should’ve been doing this whole season, which is playing the game.”