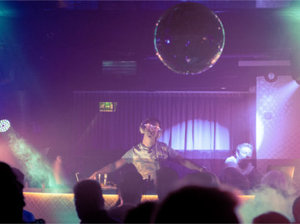 A group of four seniors announced last month that they were going to throw the Kickoff Darty of the Century at their off-campus house on Cedar Street to welcome the new year. The group, consisting of finance majors Travis Dively, Logan Murand, Eddie Hart and George Quinn, created an Instagram to promote the party last month, an account that now has over 2,000 followers. The group also started selling entry tattoos for $20 a person, which were permanent.

“We thought about selling wristbands or stamps for entry, but those are too easy to fake,” explained Travis. “Besides, a tattoo usually costs hundreds, sometimes thousands, of dollars, so 20 bucks is a steal!”

Despite the heavy commitment needed for entry, the group quickly amassed a large number of people inking themselves to secure their entry, raking in over $15,000 in the process. However, their plans began to spiral when, the week before the darty, the school threatened to send professors to the party, which “would’ve made things so weird,” according to Eddie. As a result, the party was pushed back two weeks, and a decoy party for the professors was held.

At the decoy party, George got into a conversation with his freshman year theology professor, Fr. Arthur Anselme. It was unclear what the two were talking about, but according to Logan, “I kept looking over and seeing George crying. At one point, I tried to intervene, but the rest of the priests at the party formed a wall and started singing the Halo theme and wouldn’t let me get to George.” By the time the wall had dispersed, George and Fr. Anselme had vanished, much to the concern of his three roommates.

With George still missing and the real darty only a week away, the three remaining Cedar Street residents vowed to make the darty even more amazing in George’s honor. However, once their neighbors caught wind of the party planning they threatened to call the police on them, to which Travis responded, “You can’t call the police if I’m already in jail.” Travis proceeded to commit grand theft auto. After going to jail, Travis was faced with a choice of spending 30 years behind bars or immediate release if he committed himself to serving God; he chose the latter and was shocked when he went to the tree chapel and found his ex-roommate George.

At that point, Logan and Eddie were the only two remaining to plan the darty. Unfortunately, the two weren’t really close and were really only living together because they were both close with Travis. Without him there, they quickly ran out of things to talk about and began to go insane. As soon as Eddie heard that Travis was out of jail and joining the priesthood, he decided to do the same, like the shameless follower he was.

Logan was still determined to host the darty, so he spent the week going all out to ensure that it happened. Despite being all alone, he was able to set up the house for a perfect darty atmosphere, convince his neighbors to let him host and successfully promote the event on Instagram. On the eve of the darty, everything was set up perfectly, and Logan had pocketed $25,000 from entry tattoos.

That night, as Logan was about to drift off to sleep, a ghost wearing a 1998 Vince Carter Raptors jersey appeared in his room. Logan began to scream, but nobody could hear him. The ghost explained he had lived in that very house, and that he too attempted to throw the greatest darty of all time. At the ghost’s darty, someone called elbows on him on a winning shot in pong, and it filled him with uncontrollable rage. Ever since, he vowed to never let anyone enjoy a darty ever again.

“Beware!” bellowed the Vinsanity ghost, “Anyone who attends your darty tomorrow will be completely sober.”

Logan ran out of his house screaming and immediately turned to a nearby church despite being an atheist. He then took a vow of silence for the rest of his life.

For Travis, Logan, Ethan and George, their holy trinity no longer consists of kegs, shots and red solo cups. None of the four seem to be showing any signs of wanting to leave training for the priesthood, with Travis even expressing aspirations to eventually become the pope. Now, over 1000 students are  down $20, with a tattoo of Joe Rogan on their wrist for the rest of their lives.