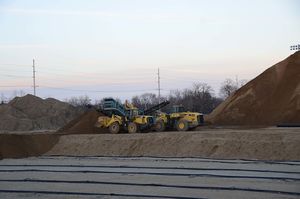 Pope Francis insists that environmental damage amounts to a sin against creation and calls for responsible stewardship of the Earth and its resources. In response to this entreaty, Notre Dame is installing a $40 million geothermal system across campus as part of its overall plan to take advantage of a renewable source of energy to help heat and cool campus buildings.

Though saving money is not the primary goal, geothermal systems have a relatively quick positive return on investment when compared to other renewable energy sources. The school will also reduce its carbon footprint, eliminate its use of coal by 2020, improve air quality, increase its overall efficiency and add more diverse energy sources, according to Paul Kempf, senior director of Utilities and Maintenance.

The first phase of the project was completed during the spring of 2016 in order to power the Pasquerilla Center and Ricci Band Building. The second phase was completed this summer to provide energy to the Notre Dame Stadium. The third and final stage is currently taking place under what will be the Ricci Athletic Fields.

When the third phase is complete and fully functional, the three together will reduce Notre Dame’s carbon dioxide emissions by 11,803 tons, an eight percent reduction compared to 2016, Director of the Office of Sustainability Linda Kurtos says. That is the equivalent of taking almost 1,000 cars off the road each year.

Notre Dame joins more than 100 colleges in the U.S. that use geothermal as a campus energy source.

The geothermal energy project is just the beginning of the university’s progress towards going green. The university is partnering with the city of South Bend on a 2.25MW hydroelectric generation facility on the dam in the St. Joseph River, which will generate about seven percent of the university’s electrical needs by 2019. Several photovoltaic and thermal solar systems are also in the works.

The hydro facility is just one facet in the sustainability plan that is designed to cut the university’s carbon footprint by more than half by 2030.