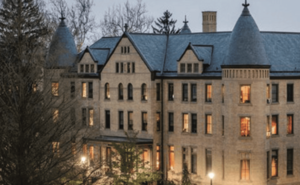 In a shocking development, the University of Notre Dame has announced a new policy banning students from all residence halls, effective immediately. After much deliberation, administrative officials have decided that this drastic move is the only way to completely ensure a safe and secure residential environment at the university. Anticipating uncertainty as to the feasibility of this new plan, director of residential life Brian Portfolio assures students that they have no reason to be alarmed.

“When Rev. Edward Sorin first arrived at this campus, there were no residence halls. This university is defined not by any of the buildings on campus but by the collective spirit of the Notre Dame student body,” Portfolio said. He quickly added that students could expect room and board fees to remain consistent for the 2020-2021 school year.

While university officials were admittedly sad to say goodbye to the long-standing and universally loved tradition of parietals, they remain optimistic that the change will ultimately prove beneficial to student life. Recommended sleeping spaces under the new policy include underneath one of the many state-of- the-art park benches scattered throughout campus, on the steps of the Main Building (graduate students only) or behind the counter of the Subway in LaFun.

While the university urges students to be resourceful in finding creative places to live, they caution students against erecting any shelters that do not align with the architectural integrity of the university.

On the bright side, the administration has pointed out that the new policy will encourage students to spend more time in the library. Additionally, the policy will allow students to focus on using their Irish1Card for essential purposes only, such as spending flex points at Taco Bell. Administration was also quick to praise the environmental benefits of the new policy. Closing the residence halls will allow the university to reduce its carbon footprint (and utilities bill) by nearly 45%.

Ellen Harman-Hoffding, vice president for student affairs, assures Scholastic that student input was carefully considered before any action was taken. The university spent weeks questioning student government, hall leadership, and individual students about the proposed policy before deciding to just ignore them and implement the new policy anyway.

In a recent press release, the university announced preparations to unveil another policy banning off-campus seniors from using the chocolate milk dispensers in the dining halls in an effort to “promote and uphold the university’s rich dorm community.”