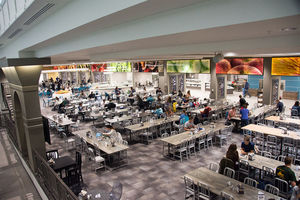 NORTH DINING HALL — A report published last week by the Pew Research Center suggests that 97% of Notre Dame students who eat at North Dining Hall still have not stopped talking about the renovations. Despite having seen the dining hall’s updated interior multiple times a day for the past several weeks that classes have been in session, the residents of North Quad reportedly haven’t failed to mention at least twice daily that, yes, NDH is slightly different from how it was in previous years.

When asked about the phenomenon, Stanford sophomore Hank Gunderson spent nearly 34 minutes agonizing over every minute detail in the building’s not-quite-so-recent refurbishment, at times becoming quite heated.

“That new lounge in the lobby is honestly pretty cool, and the whole place looks so modern, but, like, maybe too modern? I don’t know. It is kinda harder to get around, and, I swear to God, the pancakes have never been the same!” he said, in part.

The report indicates that upwards of 84% of diners begin their tirade about New North with some variation of “Don’t. Even. Get. Me. Started,” or will take a deep breath and stare intently at the floor for several seconds before answering, often in tears. Data also suggests students still spend an average of nine minutes per day venting about the changes, only down one minute from the estimated 10 spent daily during the first week of classes.

The Pew study also confirmed that a remarkable 63% of awkward dining hall conversations between freshmen this year have begun when one student glances vaguely across the room and mumbles something along the lines of “nice chairs.”

The authors of the study have gently suggested that students perhaps hurry up and get over it.

At press time, Gunderson was lamenting (for the third time that week) to friends about how the new pasta line at North is “too frickin’ long, man. You know, I just feel like that’s something that can’t be overstated.”