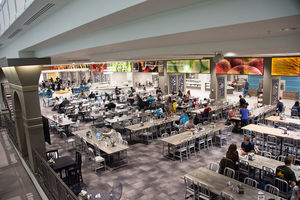 In order to restore balance to the universe following the reinstatement of Grab and Go, North Dining Hall has announced that they will no longer tolerate any eggs on their premises. In a press release, an NDH spokesperson stated that the omelette bar would be immediately ripped from the building and that any students caught with contraband materials would be expelled and thrown in jail, no exceptions. Videos, images and audio recordings of eggs were also banned; an NDH worker called them “Chicken Propaganda.”

“We don’t want the students even thinking about thinking about eggs,” the head chef of NDH said. “That kind of nonsense should be relegated to South Dining Hall, which is where losers and heathens feast.”

One sophomore has already been arrested for sneaking in 14 raw eggs in his back pockets. He would not have been caught had he not sat down in front of an NDSP officer before remembering to remove the eggs.

“His plan was to cook them in the waffle iron,” the arresting officer said, shaking his head in disgust. “You know, it’s chumps like these that remind me why I got into this line of work in the first place.”

The former student’s bail is currently posted at the exact cost of the Campus Crossroads project.