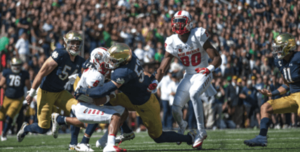 The Irish welcomed the New Mexico Lobos to Notre Dame Stadium in week two of the college football season for the first-ever meeting between the two schools. With No. 3 Georgia looming in week three, No. 7 Notre Dame showed no signs of distraction and won handily 66-14.

Find themselves they did. Notre Dame’s offense exploded following a 35-point output in the season-opener at Louisville. Senior quarterback Ian Book threw for 360 yards and a career-high five touchdowns on 15 of 24 passing.

“I felt comfortable,” Book said. “It was good as an offense getting the confidence up for everybody, being able to go out there and execute.”

After the Irish punted on their opening drive, it was the Notre Dame defense who opened up the scoring. New Mexico faced a third-and-8 from their own 30-yard line. Senior quarterback Sheriron Jones threw left, trying to find junior wide receiver Marcus Williams. Freshman safety Kyle Hamilton jumped the route for his first career interception and took it to the house, putting Notre Dame up 7-0.

The Notre Dame defense tallied three interceptions on the afternoon, with the others coming from senior safeties Jalen Elliot and Shaun Crawford. They held the Lobos to just 14 points despite giving up 363 total yards.

“There was a lot of execution, everyone just went out there doing their job,” said junior defensive tackle Myron Tagovailoa-Amosa. “Everybody’s prepared. This whole summer we’ve been working for moments like this.”

Carrying a 14-0 lead in the second quarter, Davis had the chance to show off his preparation as well. The junior had practiced and played at numerous positions for the Irish, including quarterback, running back, wide receiver and cornerback.

On first down, Davis lined up on the outside as a wide receiver and came in motion towards Book right before the snap. He caught Book’s shovel pass and ran 59 yards to the end zone on the reverse, moving the Irish lead to 21. Following the victory, he was awarded the game ball.

“A humble accomplishment, that’s what it felt like,” Davis said. “The first play I got the ball, I scored — just a wonderful opportunity.”

Book threw for two more touchdowns in the second half before the backups came in. Sophomore quarterback Phil Jurkovec led the Irish on a nine-play, 58-yard drive that ended with a one-yard rushing touchdown from sophomore running back C’Bo Flemister. Even third-string quarterback Brendon Clark got some playing time, as he connected with sophomore wide receiver Braden Lenzy for a 22-yard touchdown.

The Irish covered the lofty 35-point spread and their 66 points were the most scored by the team since 1965, a 69-13 win at Pittsburgh. The game also marked the most points in a home opener since the 73-0 win over Haskell in 1932.

While the win in front of a home crowd was satisfying, Kelly and the team quickly had to shift their focus toward No. 3 Georgia. The game presented the biggest road challenge in years, and Notre Dame sought to avenge their one-point loss to the Bulldogs in 2017.

“Just keep it rolling. Domination, playmaking,” said McKinley. “This year I think we definitely can take them.”