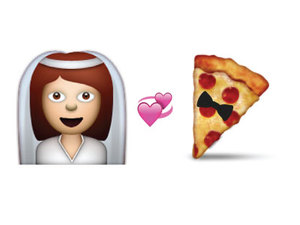 When senior Sean Pepperon’s girlfriend told him they needed to talk about their relationship, he expected a tough conversation. He didn’t expect, however, to find out she was leaving him for pizza.

A BuzzFeed list inspired fellow senior Megan Naughton to give up men altogether in favor of a distinctly more edible companion. The article, entitled “41 Reasons Eating Pizza Is Better than Being in a Relationship,” outlines reasons why spending time with pizza is better than spending it with a human being. It’s logical selling points for pizza-over-people include “you cannot hurt pizza’s feelings” and “you can’t get an STD from pizza.”

For Naughton, the list made her realize something she felt she had known, deep down, for years: pizza made her happier than the men she dated, and it tasted better.

But these explanations didn’t make sense to Pepperon. He saw himself as a fine boyfriend, but knew he couldn’t compete with delicious food, especially pizza.

“I never did anything to make her want to leave,” he says. “She was always bugging me about forgetting her birthday, but that never happened. We only started dating last semester and her birthday is in June.”

Regardless, Naughton says her new relationship with pizza has done more for her than she could have ever imagined.

“It’s been really great, especially the eating part,” she says. “The cheese is good, and I like the toppings. That’s another thing people don’t think about, all the different toppings. When you have a boyfriend, you can try to get him to change the way he dresses or his haircut, but he’s still pretty much the same. But with pizza, you can get an entirely different flavor, like, at least once a day. You can go from sausage to mushrooms to anchovies. It keeps things interesting.”

Pepperon claims he tried to convince Naughton that she had space in her life for both their relationship and pizza, but there was no changing her mind.

“I told her that I was fine with her wanting to spend more time with pizza,” he says. “I even suggested that we could eat pizza together, I was willing to try it, I wanted to make her happy. But she wouldn’t listen. She told me what she and pizza had was special, and that she didn’t need me anymore. We haven’t talked since, but I see her around campus. She waits in the Pizza Hut in LaFun while they make fresh batches of those little personal pizzas and then buys every single one. I saw her house an entire pizza from Vesuvios, inside Feve. Like, she left, bought the pizza, and brought it back into the bar. She was drunk, but come on, that’s a lot. Honestly, I’m as worried about her as I am hurt.”

Pepperon’s friends haven’t been as supportive as he had hoped. As much as they’ve tried to support their friend, they can’t help but love pizza.

“My roommates keep making fun of me about it,” Pepperon says. “They get pizza all the time and just eat it and laugh at me. It was sort of funny at first, but they’ve ordered Papa John’s for dinner the last four nights. It’s getting old.”

It’s been difficult, Pepperon says, to survive in a college environment, where pizza is all around him. Seeing happy pie-eaters around campus has at times driven him to the verge of tears. He even feels grief when he thinks about himself.

“It’s awful because if you add an ‘i’ to the end of my last name, it’s just Pepperoni,” he says. “And that’s got to be the most popular pizza topping around. I’m pretty much human pizza and it’s not good enough.”

Naughton says she has no plans to go back, asserting that pizza does more for her than any man ever could or will.

“The feeling of taking that first bite, when the cheese is still a little melted, it’s like no other,” she says. “No boy can do that for me.”