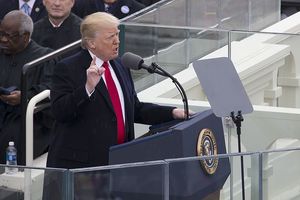 Fifty students gathered in the Montgomery Auditorium in the LaFortune Student Center to watch the 58th Inauguration of the President of the United States on Friday, Jan. 20.

Jeff Murphy, treasurer of the ND College Republicans, says “The atmosphere was absolutely incredible. Everyone was so excited to witness this historic moment. This journey began over a year and a half ago, and to see everything finally come into fruition was amazing.”

The club garnered heavy criticism at the beginning of the semester when they published a letter supporting the then-GOP presidential nominee, Donald Trump. “These criticisms ranged from general statements of disagreement to complete condemnation of the club and our members,” Murphy says.

Whether they watched with despair or joy, people across America — and the world — tuned into President Trump’s inauguration.

As for Trump’s inaugural address, Murphy says, “It was a unique speech for the President due to its philosophical nature. The speeches he gave throughout the campaign were very policy-oriented, focusing on the details of his presidential plans. This speech, however, was more about the philosophical theme that guided his decision-making in constructing those policies and legislative ideas.”

President Trump explained how the transition of power taking place on the day of the inauguration was not merely from the Obama administration to Trump’s administration. Rather, it was the transfer of power from Washington D.C. back to the American people, a key aspect of his campaign.

Murphy says, “Trump highlighted one of the most contrasting aspects between himself and the now former President Barack Obama in his explanation that the American people will not be ignored by the Trump Administration, exclaiming, ‘You will never be ignored again!’ This was perhaps my favorite characteristic of his address. Contrasting President Obama’s self-focused inaugural address, President Trump focused on the role of the President as someone who acts as a medium through which we, the people, make decisions.”