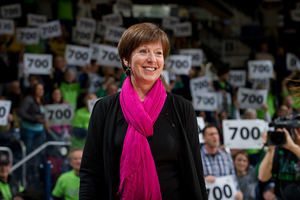 Under the bright lights of Symphony Hall, 11 of basketball’s most accomplished coaches, players and administrators received long-due recognition for their accomplishments. Chief among them was Muffet McGraw, head women’s basketball coach for the past 30 years.

On Sept. 9, Notre Dame’s all-time winningest single-sport coach took center stage at the 2017 Naismith Hall of Fame Enshrinement Ceremony in Springfield, Massachusetts, the birthplace of the game of basketball.

“It was an incredible event,” McGraw said. Surrounded by former teammates, former and current players and her family, she became the second Hall of Fame honoree from Notre Dame, the first being the legendary athletic director Moose Krause.

“I am grateful for Title IX and for the opportunities it has given to women like me, who dreamed of a future where we could do the same job as a man, where playing a game could lead to a 40-year career. But I never dreamed my future would bring me here,” she said in her speech.

“I played at Saint Joe’s and when my career ended I thought, ‘Gosh, I don’t know if I can give this up. I really like it.’ And I was a sociology major and jobs were hard to find at that time, so I thought, ‘I’ll try coaching,’ and a job opened up at a local high school. Thought I’d give it a try and from my first practice, I was like, ‘This is it,’” she said. McGraw moved on to her alma mater as an assistant in 1980 and then took her first head-coaching gig at Lehigh University in 1982.

When the position opened up at Notre Dame, she applied. McGraw was hired on May 19, 1987, and has remained the Karen and Kevin Keyes Head Women’s Basketball Coach ever since. In that time, McGraw has amassed 22 consecutive NCAA tournament appearances, 15 Sweet 16 trips, seven Final Fours, five championship game appearances and the 2001 national title.

In her 30 years at Notre Dame, South Bend has also truly become home to McGraw and her family.

“I love the Midwest now. I am a Midwesterner now. I got rid of the [Philly] accent. I love this community. It is a very, very supportive community,” McGraw said.

“We love it here. And so I am just blessed I think being at Notre Dame is like a dream come true. When I walk around campus and I look at the Golden Dome, I know what it stands for and I think, ‘I can’t believe I’m here.’ I’ve been here 30 years and I still have to pinch myself.”