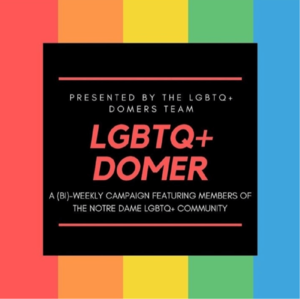 After talking with David Krashna, the student body president from 2016 to 2017 and editor of “Black Domers” — a book of essays about the African American experience at Notre Dame — freshman Dane Sherman recognized that the LGBTQ+ community needed to be represented in the same way.

“We have a lot of these stories on our campus right now,” Sherman said. “And they’re not being told.”

“The dominant narratives are of white gay men at Notre Dame, [whose] stories are super valid and super important, but it’s definitely a different experience than being a black trans woman at Notre Dame,” he explained.

Sherman recognized that he could adapt the Black Domers concept to spotlight the LGBTQ+ community after his conversation with Alex Coccia, the former student body president from 2013 through 2014 and co-founder of the “4 to 5 movement” — as four out of  five students support the LGBTQ+ community. From their meeting,  Sherman  learned how PrismND was established, and the idea for the book “LGBTQ+ Domers” was born. He gathered four other executive members to spearhead this project: sophomore Eliza Smith and three first years: Will Kennedy, Connor Tinson and Cecilia Guarnuccio.

“It’s not just going to be stories,” said Smith. “There’s going to be a few chapters talking about specific things that affect Notre Dame’s community and LGBTQ+ community.”

The book will be a tangible way to ask the community and in particular, the administration, for inclusive change, centering the effort around Notre Dame’s non-discrimination clause, which currently does not include sexual orientation as a protested identity.

“While we [have] progressed so much as an institution towards being accepting of queer and trans students, we still have so much more work to do for the non-discrimination clause, [evident in how] trans students [are] being forced into the dorms that are the sex assigned to them at birth,” said Sherman.

“LGBTQ+ Domers” builds on past efforts to expand the clause, but Smith said that there has been backlash against this idea. “Either [the administration is] blind to the struggles [of the LGBTQ+ community] or they use their Catholic teachings as an excuse as to why they refuse to include it,” Smith said.

The aim of publishing more intersectional queer stories is to bridge the generational gap by making these diverse experiences more accessible to past domers who may not have discussed it as openly.

“We think this way we can reach those older communities and the people who are in power,” Smith said. “Notre Dame is so much more diverse than it was when most of those people in the board of directors and administration were here, and we are all a lot more outspoken for that diversity.”

To enable more current students and alumni to hear about the LGBTQ+ Domers project, the team has started an instagram account, @lgbtqdomers. Guarnuccio said that the two goals behind starting the account are to share people’s experiences and to highlight the people who have been working on the project.

Kennedy added that once the book is closer to being published, the account will be used for the promotion of “LGBTQ+ Domers.”

“People can submit stories either anonymously or with their name, and it can really be anything that they want. This is about their experience” Guarnuccio said.

Smith emphasized that @lgbtqdomers aims to stand out amongst other Instagram accounts by focusing on people rather than a theme.

“It’s very human-centered,” she said. “It allows us to bring in a part of the community that’s often ignored or that has been prejudiced against for decades, specifically here on campus, and not just giving them a place to call home, but also a place where people can come to learn and to hear these stories, and hopefully have some self reflection of that.”

Kennedy concludes that if there is one reason for people to follow @lgbtqdomers, it would be to get a better sense of the LGBTQ+ experience on campus today to supplement what will be available in the book.

“That’s what a lot of the focus of the account is going to be,” he said. “Because the little stories that we’re going to post aren’t going to be the ones from the book. For one thing, you can at least understand what this experience is like being LGBTQ+ at Notre Dame, right now, and your friends can be in the same position.”