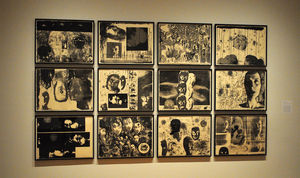 From Jan. 14 to March 18, the Snite Museum of Art is featuring an exhibit titled “Modern Women’s Prints.” The exhibit features prints by American women from the Snite’s permanent collection as well as some recent acquisitions. The works reflect a variety of printmaking techniques and cultural traditions and include pieces by artists such as Jennifer Bartlett, Deborah Muirhead Dancy and Grace Hartigan.

Printmaking became popular with artists in Europe and the U.S. in the late nineteenth century. This widely admired art form, dating back centuries, can make use of many different types of ink, surface media and engraving methods.

“Unlike their predecessors, these printmakers designed their own images, created their printing matrices and pulled their own multiple originals by hand or at the press,” a Snite spokesperson said in a recent press release. “The notion of self-reliance was comfortable to Americans, and many women and men pursued printmaking both as a hobby and as a profession.”

Women in particular helped organize the spread of print clubs in the U.S. in the 1910s and 1920s, but with World War II, people stopped buying graphic media. Printmaking became more popular when Tatyana Grosmann founded United Art Limited Editions (UALE), a print workshop on Long Island, in 1959. Painter Jun Wayne opened a lithography workshop in Los Angeles shortly after, and the next fifty years saw a great increase in the popularity of printmaking. The Snite exhibit showcases many works from UALE and the Wayne workshop.

Visitors can see the exhibit during the Snite’s operating hours, which are Tuesday through Friday, 10 a.m. to 5 p.m., and Saturdays and Sundays, noon to 5 p.m. Admission to the museum is free.