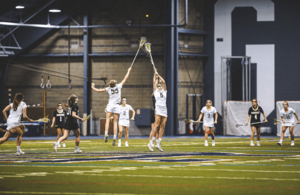 Notre Dame’s men’s and women’s lacrosse teams are perennially competitive. So it was a great disappointment to not see either squad in action after the coronavirus pandemic canceled their 2020 seasons. The sport has returned this spring, however, and both teams have found success thus far this season.

The men have mostly dominated the opponents that they have faced thus far and find themselves 4-1 after facing one conference opponent. Will Yorke leads the way for the Irish with a team-high 10 goals scored. Pat Kavanagh leads the team in total points with 28 and leads the  country in assists per game. They lead an Irish offense that has scored double-digit goals in every outing this season and scored 19 goals on two separate occasions. Meanwhile, the team remains impressive on the defensive side as well, only conceding 33 goals throughout five games.

Currently, the men find themselves ranked No. 9 in the media poll. However, the ACC schedule will prove to be more difficult, as all four of the other teams in the conference rank ahead of the Irish in national polls. Their strong defense will need to continue in order to find success in such a deep league.

The women’s team has also found success in the first half of their season, and find themselves ranked an impressive fifth in the country. Their record sits at 5-2, with the only losses both coming in tight contests against second ranked Syracuse. The second game of this doubleheader against the Orange saw the Irish take a 7-4 lead into halftime, only to be outscored 11-5 in the second half to fall 15-12. While that pair of results may have been disappointing, the team has rebounded nicely since, with wins over Liberty, No. 19 Louisville and No. 9 Duke.

The offense has dominated so far this season, scoring 108 goals in only seven contests.  Five Irish players already have double-digit goals on the season. Samantha Lynch leads this high-powered offense with 22 goals, and has already been named ACC Offensive Player of the Week twice this season.

While the team is currently ranked fifth nationally, it is in a similarly loaded ACC that boasts four out of the top five nationally ranked teams and six out of the top ten. This explosive scoring offense will face difficult tests through the remainder of the season, but it has the weapons necessary to meet and defeat the challenge.