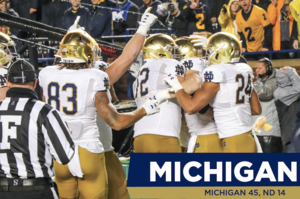 If Notre Dame’s first loss of the season was a close nail-biter, the second was the opposite. The No. 8 Irish fell behind early to No. 19 Michigan in the contest and never recovered, losing 45-14 in the midst of a relentless downpour in Ann Arbor.

“We got beat,” junior safety Alohi Gilman said. “They were a better team than us, so it’s not a good feeling, but we’re going to learn from this.”

With wet conditions beginning well before kickoff, the Wolverines attacked on the ground from the opening drive and didn’t complete a pass until midway through the second quarter. By that point, Michigan had amassed 162 rushing yards to Notre Dame’s 10. After a field goal put the Wolverines on the board in the first quarter, running back Zach Charbonnet increased the Michigan lead to 17-0 with a pair of rushing touchdowns in the second quarter.

Notre Dame finally got on the board with 5:27 remaining in the third quarter when a pass interference penalty on a third down gave the Irish a fresh set of downs. They took advantage of the second chance: Ian Book connected with Cole Kmet, cutting the deficit to only trail 17-7. The Irish briefly looked reinvigorated, but Michigan rattled off 28 unanswered points to quell a comeback bid. Michigan quarterback Shea Patterson threw a pair of touchdown passes and finished with 100 yards in the air, running back Tru Wilson added another rushing score and backup Dylan McCaffrey tacked on the final Michigan touchdown with 4:23 to play. Notre Dame backup quarterback Phil Jurkovec answered with a 14-yard touchdown pass to Javon McKinley with 3:45 on the clock to bring the final score to 45-14.

As for the ground game, the Irish compiled just 47 rushing yards, led by Jahmir Smith and Tony Jones Jr. with 15 and 14 yards, respectively. Michigan shut down Jones, who had broken 100 yards in each of his last three games, and he also was injured in the matchup.

“That’s not our identity but that’s what we showed tonight, and we own what we showed this evening,” Kelly said. “We’re a team that makes plays. We weren’t making any plays, and it felt like it was going to be a struggle from the get-go.”

Drew White shone on defense with a career high 11 tackles, and Asmar Bilal added nine, but the 45 points the defense allowed was a season high for an opponent.

The loss squandered any hope of a College Football Playoff berth, but the Irish could still be eyeing a New Year’s Six bowl if they won out.

“This is an all-in situation with players and coaches any time you have a defeat like this, but when we speak to the team, that’s not the team that I have seen play for the last few years, and we’ve got to figure out why,” Kelly said.

The Irish would attempt to bounce back from the loss when they hosted Virginia Tech the following week.