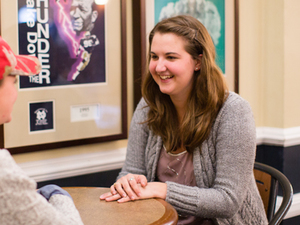 Junior  Maggie Skoch sat in the waiting room in the University Counseling Center (UCC) feeling a strange mix of emotions.

“It’s this feeling where you simultaneously don’t want to see anybody you know…but then at the same time you’re like, ‘I almost want to see someone I know to know that I’m not alone,’” says Skoch, a Pre-Professional and Theology major and president of Notre Dame’s chapter of the National Alliance on Mental Illness (NAMI).

A record number of Notre Dame students have used UCC services this year. According to UCC Director Susan Steibe-Pasalich, Ph.D., 633 students have sought counseling this academic year, which is approximately 8 percent more than last year at this time.

In the past, mental health resources across the country were scant and under-utilized because of the stigma associated with mental illness. Today, that is rapidly changing, especially at Notre Dame

Notre Dame resources will improve next year thanks to a $10 million gift from alumnus Mark Gallogly and his wife, Lise Strickler, to create the Rev. James E. McDonald, C.S.C., Center for Student Well-Being. The center will focus on preventative and critical care for students and staff.

Rev. McDonald, Associate Vice President and Counselor to the President, says, “Notre Dame is an ideal place to encourage change because it’s already a caring community. If there’s any obstacle, it’s just knowing how best to care.”

Talking about mental illness may be the way to eradicate stigma and get help for those who need it.

Skoch once told an old boyfriend about struggles she’d had with mental illness. “He kind of stopped and looked at me,” Skoch says. “He lowered his voice and goes, ‘Did you ever consider the S-word?’ And I was like, ‘suicide?’”

“I’m not trying to be trite, but talking about suicide isn’t going to make somebody commit suicide,” Skoch says. “[Stigma] is not easy to eradicate, but it’s easy to fight, because all you really have to do is talk about it,” she says.

“All of us from high school were valedictorians and salutatorians and on sports teams…Our sample size is so distorted,” Guatam says. “A lot of people go through the stress, but no one is talking about it.”

Everyone handles mental illnesses in a different way, and the symptoms may not be immediately evident.

“Sophomore year I was struggling with a lot, trying to balance the social life and academics,” Gautam says. “I think I was under a lot of pressure and stress, and that just started bringing me to this kind of bad place.”

“I had suicidal thoughts and these really scary dark things that I didn’t really know how to handle. Looking back, I was really depressed, but at the time I didn’t really know what that was. You’re taught a lot of things about what to expect when going into college…but nothing really prepares you for that.”

Gautam thinks people have become more aware of mental illness in the short time she’s been in college. She says, “I think it’s definitely become more of something you can have a conversation about.”

It’s relatively common for mental illnesses to arise in college. According to the American College Health Association, one in four young adults between the ages of 18 and 24 have a diagnosable mental illness and more than 25 percent of college students have been diagnosed or treated by a professional for a mental health condition within the past year.

“Things are changing. There are a ton of stressors,” Skoch says. “You’re more independent. Pretty much everything about your life is turned upside down.”

Mix all of that with a developing mental illness or a preexisting condition and there’s merit for the term, “the sophomore slump.”

Gautam says the UCC helped her out of that slump. “My counseling experience at St. Liam’s was super, super helpful getting me through the roughest times,” Gautam says. “They were able to help me with the tools. I didn’t know how to handle those things.”

Though she believes getting help is important, Gautam notes that mental illness doesn’t have an easy cure. “It doesn’t just always magically go away,” Gautam says. “I used to think of it as very linear. In actuality, it’s a lot more complicated.”

Gautam recommends talking to others about your thoughts, journaling, physical activity, different breathing exercises in moments of stress and “just being” for a moment or two. Gautam says, “It’s so important to keep caring for yourself even when you think the worst of it is over.”

Gautam uses the UCC now for specific issues she wants to work on like anxiety about a specific event, for example. However, like Skoch, Gautam also remembers her first visits to UCC and not wanting to be seen as vulnerable.

Skoch says, “Ultimately, we fear being the only one who is struggling with these issues.”

And this year, they’re talking about it.