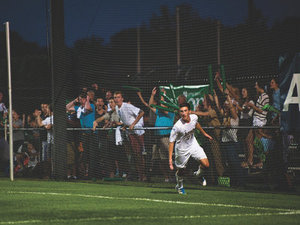 Notre Dame Men’s Soccer continued its early season run of dominance with a 4-0 win over UAB, claiming a share of the title in the Mike Berticelli Memorial Tournament. Sophomore forward Jon Gallagher scored twice, while two seniors, defender Michael Shipp and Connor Klekota, each chipped in a goal. All three players, along with goalkeeper Chris Hubbard, took home First Team All-Tournament honors, while Hubbard, Shipp and Gallagher received Most Outstanding Player awards for their respective positions.

The game marked a number of milestones for the Irish: the 500th win for the program, the first Berticelli Tournament win in three years, and the continuation of the season-long goal drought the Irish have imposed on their opponents, which reached four games.

As a result of their early season success, the Irish moved up in the polls from number five to number two, behind only Creighton. With a draw against Maryland—the only blemish on their record—the undefeated team is on track to sustain the excellence of the previous three seasons, which have included a Big East Championship, an ACC Coastal Division and conference championship and, of course, the 2013 NCAA Championship.

Head Coach Bobby Clark couldn’t be happier with the team’s hot start. “I’ve always said coming out of these two tournaments that if you’re above .500, you’re really good, and to be where we are is terrific,” Clark says.

The Irish are in the midst of a challenging five-game stretch that includes three top-10 opponents. They face off against the North Carolina Tar Heels Sep. 18 at 5 p.m. in Chapel Hill.