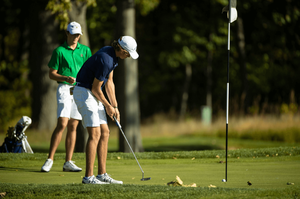 The Notre Dame men’s golf team had to wait nearly 10 months between seasons before they could compete once more. After the team’s first tournament this season, Irish head coach John Handrigan said, “I can’t tell you how much I’ve missed competing with this great group of young men. The desire and passion they bring every day is special.”

Although the COVID-19 pandemic cut the team’s 2020 season short, Notre Dame’s 2021 performance thus far has proven that the Irish coaching staff and players viewed the pandemic as an opportunity to improve.

The team began their season with a three day invitational hosted by Florida State. They placed sixth after the opening round, where junior Taichi Kho led the team with a score of 70, followed by a score of 72 from fellow junior Andrew O’Leary. Freshmen Tucker Clark and Angel Marcon also added scores of 74. During the second day of play, Clark posted a 70 while sophomore Palmer Jackson finished with the most birdies to shoot a 71. Eventually, the team ended up placing sixth in the Camp Creek Seminole Invitational, where Clark led the team with the lowest overall score.

During the Timaquana Collegiate tournament, hosted in Jacksonville, Florida the following week, senior Davis Chatfield led the way with the lowest round one score of 69, followed by Jackson (70) and Clark (72). During the second round, Clark improved with a score of 69. Chatfield and Jackson both shot 71 while Kho finished with a 72. The team was in sixth after completing two rounds, but they ended up placing eighth after the final round. Chatfield scored another 71 and finished one stroke away from placing top ten individually. Jackson placed 26th overall after scoring a 74, and O’Leary placed 45th overall, after posting the lowest final round for the team with a score of 70.

After more than a month had passed, the team then competed in the Michigan State Invite at Sea Island, Georgia. Tied for first with Michigan State heading into the final round, the Irish ended up tied for second after losing to Iowa by a single stroke. During the first round, Chatfield, Kho and O’Leary all scored a 69, while the rest of the team managed to shoot under par. O’Leary earned his career best finish and finished fourth individually, and he was joined within the top ten by Kho, who finished ninth individually.

After the Michigan State Invite, the Irish traveled to Augusta, Georgia to compete in the Augusta Haskins Award Invitational. The team competed in two rounds on Saturday, and sat in fourth in the team competition going into the final round of play. During the first round, Clark led the team with an opening score of 69, while Jackson and O’Leary scored a 71 and 72, respectively. Then, Chatfield and Jackson both performed well during the second round, each posting a score of 67. During the final round, Jackson and Clark finished with a score of 69 and 70, respectively, while Chatfield and Kho finished with  scores of 73. Most importantly, the team, which finished in third, managed to place ahead of three top-15 teams.

For the regular season finale, the team traveled to Raleigh, North Carolina to compete at the Stitch Intercollegiate tournament. During the first round, Clark tied the program record for the lowest round score by finishing with a 65. He was followed by Chatfield, who scored a 69, and Jackson, who scored a 70. During the second round, Chatfield improved his score to three-under par while Jackson was two-under. However, thunderstorm delays forced the rest of the second round to be postponed to the next day. In the meantime, the team was second overall and was losing by only one stroke to North Carolina State.

In the end, the Irish were unable to make up the deficit the next day and finished second overall for the tournament. All five Irish golfers managed to place within the top 20. Clark finished seventh individually, followed by Jackson and Chatfield who tied for eleventh. O’Leary and Kho placed fourteenth and seventeenth, respectively. The second place finish was the third straight top-three finish for Notre Dame heading into the ACC championships.

“They continue to impress me as we improve every week. We are playing at a very high level and I’m encouraged since our best golf is yet to come and we’re now entering the postseason. The mental toughness of this team is absolutely awesome and vital for success in this game,” Handrigan said after the Stitch Intercollegiate tournament.

Though the Irish started to heat up at the right time in advance of the conference tournament, the team ultimately finished in 11th place out of 12 teams, shooting +30 for the weekend. Kho led the team on the individual front, posting a score of +3 to finish in 22nd place overall after being in sixth place entering the final round. Chatfield placed 28th overall individually one stroke behind Kho at +4.

In spite of the poor team performance in the conference tournament, Notre Dame now awaits a spot in the NCAA tournament to be played at the end of May.