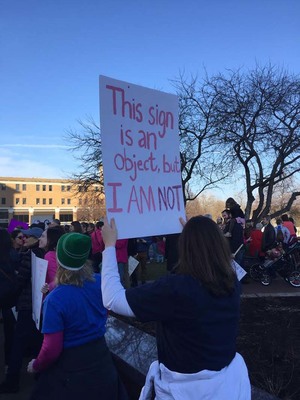 Inauguration Day was cold and gray, but on the day of the Women’s March, South Bend was as warm and sunny as the first day of spring. Like spring, it was the birth of something. In the shadow of construction in downtown South Bend, people gathered to build a movement.

When my group of Notre Dame and Saint Mary’s students arrived, the plaza was already full. Protestors spilled over onto surrounding blocks. Those who gathered were predominantly white, but I saw signs written in Arabic and Spanish as well as English. The majority were women, but there were pockets of men and non-binary people. One man held up a sign reading, “Men of quality do not fear equality.”

Even though speeches broadcasted over megaphones could not reach the ears of everyone gathered there, energy rippled outward. Two young women started an “If you’re a nasty woman, clap your hands” chant.

And then, we marched.

We marched rolling wheelchairs, we marched leaning on crutches and we marched unaided. Some cars honked supportively at the sight of the pink masses, garnering cheers in return. One white family yelled something positive about Trump from the window of their passing minivan, but they were largely ignored.

Each marcher’s regalia revealed a different cause sheltered under the pro-woman umbrella, though not all of them were congruent with each other. A few “Feminists for All Life” signs juxtaposed the pro-abortion-rights majority. At one point, a little girl in a stroller — mouth covered in chocolate crumbs — proudly pointed at her “Love Wins” t-shirt.

But that’s not all.

“A woman’s place is in the Resistance,” I overheard. “I’ve always felt that, even in the ‘60s.” The struggles the marginalized and oppressed have faced stretch back centuries. But the new resistance is just beginning.