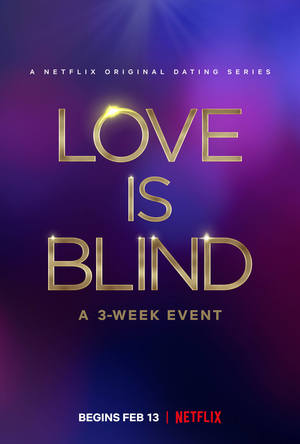 “Is love really blind?” This question, asked many times over the course of 10 episodes, is the premise of the new Netflix reality show, “Love is Blind.” The show is hosted by Vanessa and Nick Lachey, who mostly just explain the setup and moderate the one-year reunion special.

“Love is Blind” takes 15 men and 15 women and houses them in two separate living quarters. The genders only mix when dating through blue, glass walls in pods that face one another. There are two rows of pods, and the pods across from each other host the two people on the date. The so-called social experiment forces people to interact without seeing each other, allowing only for an audio connection. Singles get to meet and speak with all of their 15 options, but quickly narrow down their list of connections to find the person they want to be with.

At this point, they’re offered a choice: get engaged or part ways. Only after a proposal has been made does the pair meet face-to-face. They have to decide if their love is truly blind before inviting physical attraction into the mix.

The couples who get engaged are then jettisoned off on a luxurious Mexican vacation, while the people who remain single leave the show. As a perennially single person, I think the show should feature these singles living their best life in addition to the couples who became engaged within a week of meeting each other. There are, of course, many paths to happiness.

If they survive this Mexican vacation, the engaged couples visit each other’s homes and meet the families. Viewers watch as they try to explain their connections to caring and concerned loved ones. Some parents are supportive, others are dubious, but all couples somehow make it to their pre-set wedding day, just a few weeks after meeting.

They may walk down the aisle, but don’t be fooled. Not every couple makes it until the end of the ceremony. I was pleasantly surprised to learn that the couples who did get married at this pre-set date are still together; the showrunners take this as proof that their premise is correct: love is blind.

The couples admitted that they worked hard to accommodate each others’ lifestyles and personality quirks, but are happy to be married, which is a refreshing change from the recurring “Bachelor” breakups reported approximately three days to four months from the end running date of most seasons.

Unfortunately, the so-called premise of the show undercuts itself by only having conventionally attractive people on the show. While learning you’ll be married to the person you just met in a few weeks will undoubtedly put a strain on any relationship, there is hardly any reference to anyone’s physical characteristics being anything other than, in contestant Matt Barnett’s words, “smoking hot.”

Mentions of loving someone based on their flaws center around their temperament and habits, with the only mention of physical characteristics being Jessica’s oft-repeated claim that she “usually goes for taller guys” and that her fiancé Mark is not her type. The couple’s relationship is the most fraught with tension on the show; their segments continue to evidence that Mark is emotionally available and ready to settle down, whereas Jessica is consistently conflicted.

There is a notable engagement between a white man and a black woman, where a dialogue about race and an equal partnership is maintained by her family and between the couple. Cameron and Lauren provide the most, if not the only, thought-provoking segments about marriage in America. Diehard fans on social media have proclaimed this couple to be the epitome of love and communication, as well as the main reason they watched the show.

I would recommend this show if you’re tired of watching the struggles of Pilot Pete (#worstbachelor?) or if you are looking for a completely unrealistic setup with a few surprise endings.