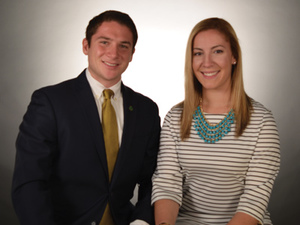 “Being transparent has been a concern since at least my freshman year here,” Bertolotti says. He wants to ensure that whoever is in office regularly informs the student body of exactly what’s in the works.  “Our three goals are transparency, deliverability and unity … we want to make sure we’re always getting student input. We have a couple ideas on how to make that happen.”

One of those ideas is a bimonthly email newsletter, updating the student body on what student government has been working on and what their immediate plans are, as well as soliciting feedback from students about the work being done.

“A lot of times, students don’t know until an event is advertised that something is going on, and they don’t really know what student government does,” Fenton says. They want students to be consistently in the know and voicing concerns about how things are being done.

Bertolotti isn’t the only member of the ticket with student government experience. Fenton, a marketing major with a concentrated interest in sports, was the director of national engagement and outreach under the Vidal-Devine administration. Both Bertolotti and Fenton are confident that they’ve equipped themselves with the proper skills to make the most out of their year in office.

Their platform is divided into 12 sections, corresponding to 12 departments within the student union. Each section has three goals and a timeline for the completion of each goal. Among the many ideas is a revamped professor-reviewing platform called NDreviews that would solve many of the issues students have with NDtoday.

“The problem with NDtoday is it’s not recent,” Fenton says. “There are still reviews on there from 2006, and it doesn’t have every single professor on there.” NDreviews currently exists as a website, and while its list of professors is much more exhaustive, it’s used by practically no one and has very few reviews as a result.

“The key is making sure people put in reviews,” Bertolotti says. Both he and Fenton are confident they can effectively encourage students to submit reviews and make NDreviews a useful resource.

Bertolotti would also like to reform senate proceedings to have department heads give weekly updates regarding what their department did the week previous and what they plan to do in the upcoming week. Bertolotti says this will increase both involvement and accountability. He also believes that the senate is failing to reach its legislative potential.

“Senators are there to represent their dorms, and I think it’s an insult to the position that they aren’t given more power,” Bertolotti says. Bertolotti envisions each senator bringing forth more impactful resolutions that affect more than just the wording of the student union constitution.

Bertolotti was a member of the Holy Cross Gateway program during his freshman year, and he believes that his experience as a transfer student has given him a greater appreciation for the opportunities that Notre Dame has provided him. If elected, he and Fenton plan to increase those opportunities for all students through transparency, deliverability and unity.