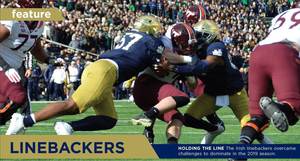 In 2018, Notre Dame’s College Football Playoff appearance was due in no small part to the linebackers who anchored its overwhelming defense. In 2019, their departure spelled uncertainty.

In the 2018 campaign, Drue Tranquill and Te’von Coney finished with 209 combined tackles, an average of about 16 per game. Without them, the position was predicted to be a weakness for the Notre Dame defense this season, but the 2019 linebacker unit quickly dispelled those musings with a stellar performance against Louisville in the season opener.

Fifth-year Asmar Bilal was the only key returner at the position, having played in every game since his freshman season. Bilal, who finished the year with 79 total tackles, was joined by juniors Drew White and Jeremiah Owusu-Koramoah, who had much less prior experience.

“I think this linebacker unit is special and I knew that before the season,” White said in a post-practice press conference on Dec. 21. “I knew before we took the field that this was a special group of guys. That’s just the way we came in and prepared every day.”

White, who only saw the field in four games in 2018, became one of the most valuable players on the 2019 defense. He recorded a career-high 11 tackles in the Oct. 26 loss to Michigan and almost matched that performance with 10 tackles in the Irish’s 52-20 rout of Navy on Nov. 16.

“Me and the guys listened to the coaches’ plan,” White told Fighting Irish Media after the Navy game. “We had a lot of effort and energy out there, and we just flew around and had fun.”

The Navy game provided a special opportunity for the linebacker unit to showcase its abilities, since Navy’s triple-option offense is notoriously hard to face, especially against this year’s version which led to a No. 23 ranking when the Midshipmen entered South Bend.

“Preparation is key, being more physical than the opponent, imposing our will, trusting the process,” Owusu-Koramoah told Fighting Irish Media. “It was a great win because we bought into the process this week, and we worked really hard and just had attention to detail throughout the week.”

The Navy contest fell in the middle of the Irish’s six-game win streak that spanned from a narrow 21-20 win over Virginia Tech on Nov. 2 to a resounding 33-9 victory over Iowa State in the Camping World Bowl on Dec. 28.

Aside from allowing 45 points and 303 rushing yards against Michigan, the defense never gave up more than 27 points, including four games where they held opponents (Bowling Green, Duke, Boston College and Iowa State) to less than 10 points. The Irish also held four opponents (Virginia, Virginia Tech, Duke and Iowa State) under 100 total rushing yards. As for protecting the end zone, the Notre Dame defense allowed just 12 rushing touchdowns all season — an average of less than one per game.

“Whoever is playing, we’re just playing for the rest of the guys who aren’t playing because we know how bad everyone wants to get on the field,” White told the media on Dec. 21. “I think we’ve progressed a lot this year and I’m proud of what we’ve accomplished.”

Turning their potential weakness into an undeniable strength, the core linebacker unit exceeded many expectations. While Bilal is out of eligibility, White and Owusu-Koramoah will to return in 2020, where their preseason expectations will look very different after an accomplished season. This offseason, there is a confidence in those returners that hadn’t yet been established before this season, but that previous doubt may have contributed to the linebackers’ success.

“The drive to prove people wrong, but also not to let their teammates down, has fueled the Irish linebackers,” said Matt Freeman of Irish Sports Daily in a preview of the Camping World Bowl on Dec. 25.

With the questions surrounding the linebackers seemingly answered, offseason questions around the defense will shift elsewhere. With safeties Alohi Gilman declaring for the NFL Draft and Jalen Elliott using up the remainder of his eligibility this year, rising sophomore Kyle Hamilton is expected to earn a starting role in 2020. Graduate transfer Isaiah Pryor will compete with other returning players such as Houston Griffith for a starting spot as well, a competition that will be monitored throughout the spring and summer.