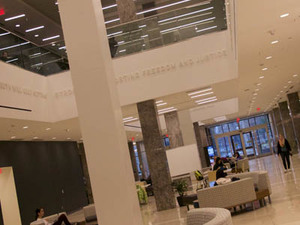 Now, as you come up this path, you’ll notice the Hesburgh Library. Built in 1963, it is currently being renovated in order to provide access to interdisciplinary and collaborative spaces, introduce state-of-the-art technologies and give a fresh, new space for my friend Becky to sit while she waits for that one kid in her foresight group to come 20 minutes late.

I know there’s a lot to take in here, but I think it’s really important to note that the library no longer looks like the inside of your grandfather’s retirement home. It doesn’t look like the Death Star, either. That’s credited to our world-renowned architect who revolutionarily decided windows make the library look less like a jail and more like a chic airport terminal.

I’d also like to point out that closeness is part of our culture here at Notre Dame. This idea is why we love having these side-by-side study carrels, not to mention these couches in the main lobby that are really just glorified coffee tables that have been upholstered and artfully placed. We like giving students uncomfortable places to sit because we believe it brings them together and instills a sense of community among the student body, especially when they’re close enough to passive-aggressively clear their throats if someone is typing too loudly.

We at Notre Dame like to honor our supporters through donorship and sponsorship programs. Not only do these programs represent our love and gratitude for contributing persons and families, but they also represent donors’ support for our community, passion for student achievement and love for higher lottery ticket numbers during football season. For example, we just passed the Frederich Power Strip, home to almost nine phone chargers at one time and even Jeff from Keough, who is oddly paranoid that someone will steal his Samsung Galaxy S4 while it’s charging.

As you move in to the main floor, you’ll see the Center for Digital Scholarship, which has a 3-D printer that no one knows about. Here, we can also find the Naimoli study carrel that was donated to us in 2012. It’s just that single cubicle, though. It doesn’t include all of the other desks around it. Just that one. But we thank the Naimoli family for their contribution.

As we walk around the gallery, I’d also like to point out the Walsh Family pencil holder, which was put in earlier today. It was originally installed in honor of the donors from either Walsh Hall or Welsh Family Hall, but since no one’s sure about the names of either, we combined them just to be safe.

On your right is the Fitzpatrick Half-Empty Coffee Cup. This fixture was installed as a symbol of our students’ passion for scholarly excellence, their dedication to the pursuit of knowledge and their inability to manage their time properly. Actually, that might just be something that someone left. We won’t really know for sure until the cleaning staff goes through later tonight.

Now, I’m really excited to show you a new part of the library. The Grand Reading Room that wasn’t named after anyone because no one could afford all of the mahogany. Nonetheless, it’s great for observing students in their natural habitat. What’s even better is that if you stand in the middle of the room, you have a phenomenal view of the stressed out graduate students wheeling around the book carts and an even better view of the McKenna automatic hole puncher that was put in in early 2014. Students can now hole punch more than three pages of paper at a time, and it’s secured to the desk by the O’Shaughnessy steel chain that was previously housed at St. Liam’s.

As this tour comes to a close, I’d like to thank all of you for visiting and encourage you to get involved with our Notre Dame community. If this tour inspires you to donate in the same way it inspires students to spend all of their flex points on ABP, we have a shipment of paper towels coming in that can be individually named and sponsored. The university would also like to note that if there is a particular feature you would like to sponsor, we are open to bids and renaming ceremonies (I am currently in the running for renaming the Knute K. Rockne Reading Room to the Kimberly I. Mai Knute K. Rockne Reading Room).

Thank you and go Irish.