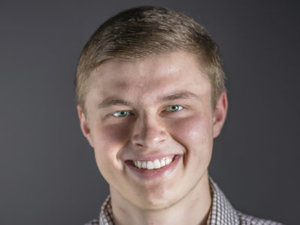 Youth typically prompts naiveté. In my young and naïve state, I didn’t think much of the importance of politics. I suppose, like many young people, the ramifications of federal action and executive decisions went way over my head.

Despite this lack of political interest and awareness early on in my life, ironically, I grew up around politics. I am after all from Ohio, one of the most important voting swing states in the country. During the past four presidential elections, whoever has won the Ohio vote has won the election.

My parents attended a White House Christmas party. I went to rallies and speeches by a congressman, a senator and the president. I participated in campaigns by phone banking. I even ran for and served as vice president of my grade school in seventh grade.

However, until the latter stages of my time at Notre Dame, politics never resonated with me too deeply.

Then, I experienced the beauty of Fox News.

Dramatization aside, over the past year, I have become fascinated by the elements of humanity associated with political authority. Leaders in high federal office, just like you and I, have emotions, struggles, failures and triumphs. Certain political narratives seem strange enough to be out of a fable, and sometimes there’s nothing more interesting than the events of Washington, D.C.

Certainly, with great power comes great responsibility. Especially in today’s day and age, when the United States has never been larger and there has never been more at stake in overseeing the path of the nation, leaders in government must make wise decisions. The results of federal decisions trickle down to you and me, even inside the Notre Dame bubble. Governance, after all, impacts economic security, national safety and civil liberties.

We are now at a crossroads. There is intense distrust and disgust over the political outlook of the United States. Voters, who expect concrete progress, have criticized the Washington establishment immensely. Special interests, party polarization and extreme adversarial partisanship are prominent features of our democratic system of governance.

Party unification and extreme partisanship are driving a stalemate in the legislative process. Can you imagine a retail business that doesn’t actually sell anything? How about a school that doesn’t teach its students? Well, the federal government isn’t performing its job of passing substantial and meaningful legislation to benefit its citizens, and this must change.

Nobody can change the party identification of elected officials in office. However, the next president must inspire both parties, persuading hearts and minds to unite and reach bipartisan agreement, not for the benefit of elected officials’ public images, but for the good of the electorate.

America needs a mini-revolution. Bold change requires sacrifice, and sacrifice is the only way that we can climb out of the hole we’ve dug ourselves into. We are $18 trillion in debt. The U-6 unemployment rate is reportedly over 10 percent, according to a July report published by CNBC. Income inequality has continued to rise due to the diminishing of the middle class and an increasingly difficult environment to sustain small business.

There are over 11 million illegal immigrants in the United States, undercutting those who apply for residency legally. The exorbitant costs of a university education have put millions of Americans in deep and seemingly unconquerable debt. The health of our environment has deteriorated due to the effects of pollution. And extremist international groups such as ISIS have emerged as true threats to the safety of Americans.

In 2016, America needs a transcendent leader. Abraham Lincoln, Ronald Reagan and FDR all met tough tasks with conviction, fortitude and competent solutions, ultimately helping to move America forward. I would argue this next year is crucial to our futures. At the moment, our futures are in the balance. We must identify the leader most qualified to overcome this immense hurdle and support that leader.

We rally as sons and daughters of Notre Dame.