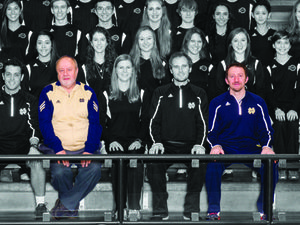 When the late coach Mike DeCicco took over the fencing program in 1962, he made it his mission to build a program that would both develop world-class athletes and instill in them the Notre Dame spirit of personal growth. In his thirty-four seasons as head coach, he led the squad to eight individual and five team national championships while sustaining a .938 winning percentage, setting the stage for future Notre Dame fencing success.

Janusz Bednarski succeeded Mike DeCicco when he became head coach in 2002. Bednarski led the team to championships in 2003, 2005 and 2011 and compiled a .909 winning percentage. His 623 wins are the third-most coaching victories in Notre Dame sports history (behind only DeCicco and Muffet McGraw).

Bednarski, however, took a leave of absence in May and his assistant coach of the past seven years, Guiorgie “Gia” Kvaratskhelia, was left with the task of guiding the team forward without its legendary leader.

“Credit to the athletes for rallying around the program, for giving us an enormous lift emotionally. The way we behaved and kept moving forward — we continued to accomplish the goal of reaching our peak athletically,” Kvaratskhelia says.

Bednarski announced his retirement on Dec. 2, officially handing over the program to Kvaratskhelia.

The newest head coach is prepared for the challenge of continuing the fencing excellence that titans like DeCicco and Bednarski have established.

“Everything I know about coaching, I know from Janusz. How to deal with adversity, how to make the program better and what approaches to use with certain individuals,” Kvaratskhelia says.

A foil weapon specialist, Kvaratskhelia has built an impressive resume in a short period of time. Junior foilist Lee Kiefer won the women’s individual championship the past two seasons under Kvaratskhelia’s tutelage. The team has also qualified the maximum four foilists for the NCAA Championships in each of Kvaratskhelia’s seasons.

In order for the new head coach to guide the team back to a championship in the coming years, there are several challenges unique to fencing, which he will face.

Fencing coaches are very specialized in their disciplines, and with Bednarski’s departure, the team now lacks a dedicated sabre weapon coach. This has resulted in increased training across weapons — an uncommon practice in fencing.

“How well we’ve handled cross-training will show in our record — but sabre has done very well so far,” says Kvaratskhelia.

Another challenge comes from the 2016 Olympics. Several key fencers will miss time next year due to the Olympic qualifying cycle, as they attempt to follow in the footsteps of former Irish Olympians like Kiefer and Mariel Zagunis. While this could prove devastating to some programs, Kvaratskhelia is confident that this team will be able to push forward.

“Strong recruiting makes us one of the top programs in the nation. We continue to find replacements equal to or in the same caliber [as those that depart] … we have such a history of excellence,” Kvaratskhelia says.

Yet awards and championships are not as important to Kvaratskhelia as fostering an environment that can develop fencers as athletes, students and people.

He looks to Coach Bednarski and Coach DeCicco’s philosophies as the template for doing this.

“Janusz conducted the program with integrity and respect at all times — he was a true ambassador for Notre Dame,” Kvaratskhelia says.

A speech Coach DeCicco gave to the team six years ago has stuck with Kvaratskhelia.

“Coach DeCicco’s message to the players was: ‘Let’s win the right way — with dignity, integrity and loyalty to Notre Dame. We’re not going to cut corners, and we will always do things the Notre Dame way,’” he says.

Kvaratskhelia has been given a desirable foundation to forge his own success. The program’s pedigree should continue to produce strong recruiting classes, and his players already seem to respect him and have confidence in his methods.

“[Kvaratskhelia] is a person who not only possesses all the tools to be a great head coach, but he also cares about our lives beyond the gym. He’s the perfect person to maintain the team’s winning culture and drive it further than ever before,” senior fencer Ryan McDonough says.

Many casual Notre Dame sports fans may not know the names DeCicco and Bednarski like they do Digger Phelps, Lou Holtz or Muffet McGraw. Yet, the fencing coaches have certainly rivaled or even surpassed these others in their consistent excellence within their field.

As the fencing program’s newest head coach, it is now up to Kvaratskhelia to continue that tradition.