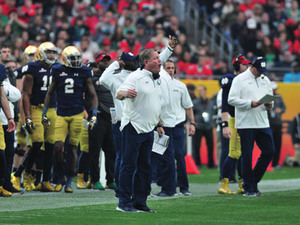 Brian Kelly’s sixth season at Notre Dame included double digit wins for the second time in his tenure. Kelly has now won 55 games at Notre Dame, including 39 victories in the last four seasons. Some fans, however, still believe that Kelly isn’t the right man to lead the Irish to the college football playoffs in the coming years.

Kelly is not Urban Meyer or Nick Saban. Meyer and Saban are two of the best coaches in the history of the game. But after 1 and 1A, there are few coaches in college football better than Kelly.

Here are some facts to justify this claim. No active coach has won more NCAA games than the Irish head coach. No other Notre Dame head coach has led the team to bowl games in every season of his leadership. Kelly is the only coach besides Lou Holtz to win 12 games in a season. What more could anyone want?

Notre Dame has not only established a top 10 recruiting program, but has also helped cultivate athletes into powerful contributors to the team’s success. Will Fuller and Romeo Okwara were three star recruits coming out of high school. This past season, they were the most dynamic players on offense and defense, respectively. DeShone Kizer was elevated to the starting position after a broken ankle sidelined Malik Zaire. Kizer led the Irish to nine wins and was even granted the distinction of the best quarterback in the NCAA by some national pundits, such as Pardon the Interruption’s Michael Wilbon.

It’s difficult to argue that the Irish have regressed over Kelly’s tenure, unlike during the stints of Weis and Willingham before him. Kelly’s initial goals were to improve Notre Dame mentally and physically. There is no question that Notre Dame can physically compete with the upper echelon of college football, including powerhouse conferences such as the SEC and the Big Ten.

In the last two seasons, the Irish have been positioned in the top 10 with a 6-0 start in 2014 and a 10-1 start this past season. Theoretically, the only force restricting Notre Dame from a surge to the playoffs was injuries to starters, which have decimated the team on both sides of the ball.

Kelly’s system has continually progressed, and although it is not perfect, there is no reasonable alternative that would present an upgrade to the strategic direction of the program. In fact, the Irish have been lucky that Kelly hasn’t seriously considered a jump to the NFL.

Notre Dame certainly must address deficiencies in order to take that next step and return to the championship stage. Notre Dame’s defensive unit tends to have lapses in the secondary and a failure to relentlessly rush the quarterback. On offense, turnovers in key moments late in games, for example vs. Clemson, still plague the Irish. There is much optimism on offense though. Kelly’s ability to groom and mentor quarterbacks while calling plays has been almost unparalleled, and a full offseason of competition between Zaire and Kizer under the coach’s oversight should spur the best signal calling that Notre Dame has had in quite some time.

Most importantly, fans should support the program and buy into Kelly’s Irish. Fans have short memories, but merely recognizing the rarity of Kelly’s success in relation to the last 30 years shows his value to the program.

Notre Dame must be reasonable and realistic. It is impossible in today’s age to be a perennial national champion. Brian Kelly has shown a keen ability to motivate players, create schemes that outmatch most opponents and energize a stagnant program that looked like the Titanic in the final years of the Weis era.

Rather than seeking yet another change in leadership, the Notre Dame fan base must continue to let that green grass grow.