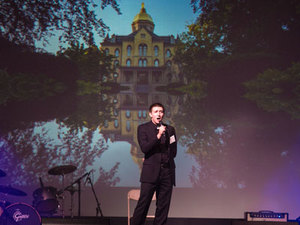 “He’s gorg,” says freshman Katie Mulligan, a business major from Chicago. Little did either of them know that a puppy named Champion was about to take the stage.

The girls were in for another treat as the Knights of Keenan took the stage in black muscle tanks and sweats to dance to “Larger than Life” by the Backstreet Boys. The tanks lasted only a few lines and the rip-off pants were removed shortly after to reveal black boxers and prominently featured socks.

Mulligan was delighted when a Knight took the stage to sing her an original song, called “Dear Katie.” She was less excited when she discovered that she was not in fact the Katie in question, but instead one of the 3,000 other Katie’s on campus.

In a joyful turn of events, Rev. John I. Jenkins, C.S.C. appeared on stage to talk about his fondness for his very large endowment, only to be told by Harvard that his just doesn’t quite measure up.

Dillon was reminded kindly that the Dillon Hall Pep Rally is not funny, Ryan girls were accused of calling daddy to use his credit card and the BP Babes were proud that their appetites are so well renowned across North Quad. Audiences were treated to Sergeant Tim McCarthy at work, and Taylor Swift got a nod in a song called “1989 Deluxe.”

Study Abroad was glorified, and the origins of the South Bend bars were revealed at last. Impressions were flaunted, most impressively in Dome of Cards as a bright Notre Dame student answered adults’ most burning questions. His major was business, he did plan on becoming Rudy and he promptly took the business card of the man who offered him an internship.

No one was safe from mockery as Saint Mary’s students were stereotyped right along with Notre Dame’s female population, alums were critiqued for being conservative and homophobic, Jenkins was accused of wanting to take over campus and no dorm was safe from its campus reputation.